Galleries >> Zaira Wasim speaks about locust controversy; says 'I am not an actress anymore

Zaira Wasim speaks about locust controversy; says 'I am not an actress anymore | Memsaab.com

Former Bollywood actress Zaira Wasim tweeted talking about locust attacks - "So We sent upon them the flood and locusts and lice and frogs and blood: Signs openly self explained: but they were steeped in arrogance -- a people given to sin. --Qur'an 7:133." Later, Zaira deleted her Twitter and Instagram accounts after being heavily trolled for quoting from the Quran. The ex-actress was trolled mercilessly for giving out such a comment on social media.

Now, clearing the air, Zaira wrote an open letter to Tarek Fatah and explained how 'this is wrath or a curse' statement made by her, during the time when the world is going through a lot. Here's what the letter read. 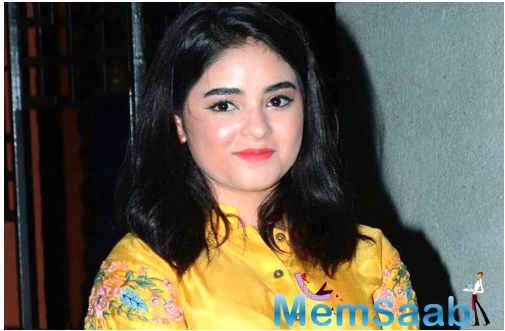 In This Image: Zaira Wasim
When Zaira shared the tweet, she faced a lot of flake from social media users. Commenting on the post, a user wrote: "Lady you must have taken into account of those people of JK, Kerala and elsewhere who are also suffering from the virus. Moreover the crops which are damaged by locust had no name as to who will consume them. In this hours of crisis please post something which is positive and reflects your education." Another user shared: "So according to you,with all due respect every year on the same time period,allah send locust to India to destroy the crops of poor farmers who are not even involve in the industrial rise,who don't use vehicle to destroy the nature,nd allah send locust only to harm the poor farmers nd not the rich one who actually destroy nature. 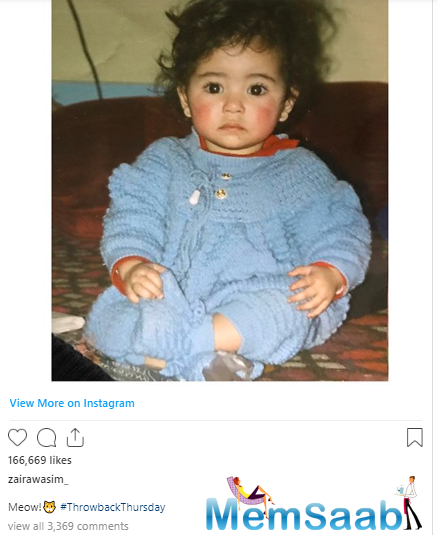 In This Image: Zaira Wasim
For the unversed, speaking about her not being an actress anymore, Zaira quit acting after shooting The Sky Is Pink, her last release, along with Priyanka Chopra Jonas and Farhan Akhtar. Saying acting would be a hindrance to her religion, Zaira Wasim made a choice of not being a part of the industry. In an interview with mid-day, she also stated how she does not belong here. Sharing the news with her followers on social media then, she wrote -"While I acknowledge with humility all the love people shower me with, I cannot emphasise enough how the praise that comes my way isn't gratifying at all for me and how big of a test it is for me and how dangerous it is for my Iman. I'm not as righteous as I might lead many to believe."

Speaking about Zaira Wasim's performance, the actress made her Bollywood debut with Aamir Khan's sports drama, Dangal, along with Fatima Sana Shaikh, and then later, she was also a part of Secret Superstar. 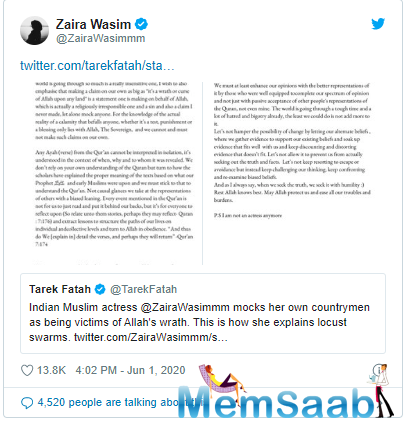 In This Image:
Though there are many who criticised the young actor's decision to quit celluloid world a few Bollywood celebrities had unanimously said in June 2019 that it's her personal decision and praised Zaira for the stellar performance she did in two of her films. Her last film release has The Sky Is Pink in her name, and ever since then, she chose the path of religiousness and not showbiz.
Latest Events