Galleries >> WHAT! 'She is getting married,' says Deepika Padukone on Alia Bhatt's wedding with Ranbir Kapoor

WHAT! 'She is getting married,' says Deepika Padukone on Alia Bhatt's wedding with Ranbir Kapoor | Memsaab.com

Alia Bhatt and Ranbir Kapoor are undoubtedly among the most adorable and good-looking couples in Bollywood right now. The actors, who seem to be madly in love with each other, have mesmerised us with their chemistry at celebrity parties or awards function, leaving their fans desperate to see them get married at the earliest. However, certain sections of the huge fan-based, have time and again spread rumours of them taking their relationship forward. Denying them often, Alia, Ranbir and their respective families put a full stop to the buzz, but everything in vain.

But now, it seems the day of their wedding is coming closer. 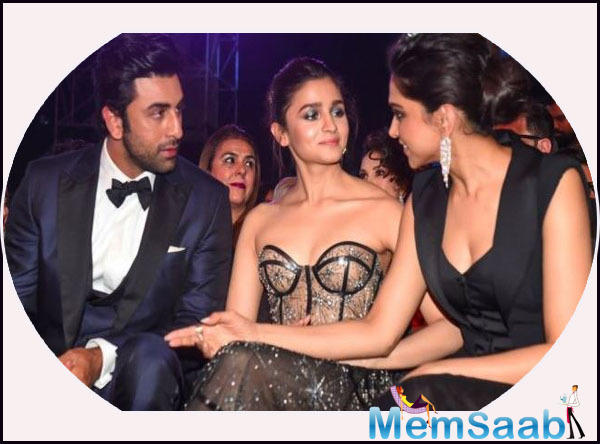 In This Image: Alia Bhatt, Deepika Padukone, Ranbir Kapoor
Well, yes. Deepika Padukone, who is Alia's best friend and Ranbir's alleged ex-girlfriend, during a panel discussion with an entertainment portal, in attendance of Alia, Vijay Deverakonda, Ranveer Singh, Ayushmann Khurrana, Manoj Bajpayee and Vijay Sethupathi, made a shocking statement of the Raazi actress' wedding with Ranbir.

It happened so that Vijay confessed that he has a crush on Deepika and Alia, but then the former got married to Ranveer. 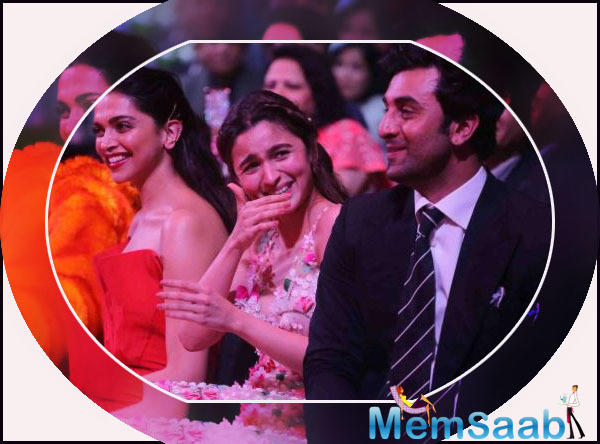 In This Image: Alia Bhatt, Deepika Padukone, Ranbir Kapoor
Interrupting in between, Deepika added that Alia is getting married. “Without shame, a lot of people on this table have been massive crushes, like been in love with some of them like these two (pointing to Deepika and Alia). She (Deepika) got married but,” said Vijay, while Deepika inserted her statement by disclosing, "She (Alia) is getting married." Vijay then continued saying the same sentence. A rather surprised Alia questioned Deepika and told, "Excuse me, why have you made this declaration?" Ending the topic, the Piku star said she just made it up and laughed it off. Speaking of Alia's-Ranbir's wedding rumour, in the month of October, a viral picture of the couple's engagement card circulated across social media. Soon, Alia gave a clarification saying, "Kya batao…Bata diya inko..Mein aapko bola na, itna baat kiya humne, sab kuch discuss kiya. Udti udti khabar hai aur woh udti hee rahegi."

Coming to Ranbir's-Alia's love story, it all began on the sets of Ayan Mukerji's Brahmastra and since then, the lovebirds have remained inseparable. 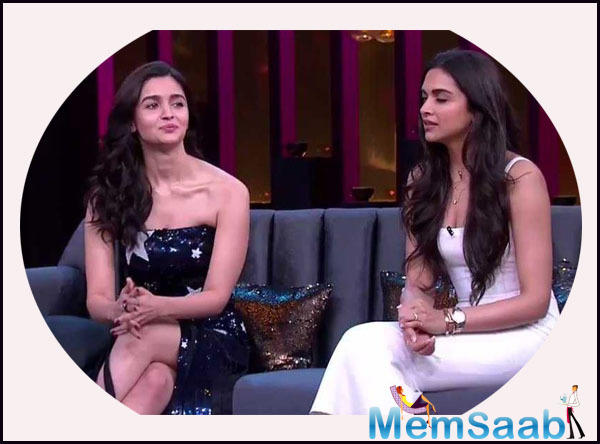 In This Image: Alia Bhatt, Deepika Padukone
The couple dropped in a hint at their blossoming love after making an appearance together at Sonam K Ahuja's and Anand Ahuja's wedding reception held in May, 2018. Ranbir's and Alia's family are all hearts for the couple and this can be mirrored through their posts on Instagram.
Latest Events