Galleries >> Neena Gupta hilarious reaction to her ID being checked thrice at the airport, says she is not ‘famous or successful’ yet

Neena Gupta hilarious reaction to her ID being checked thrice at the airport, says she is not ‘famous or successful’ yet | Memsaab.com

Neena Gupta is well-known for her impeccable acting skills, style statements as well as putting out some hilarious captions and statements. However, she always manages to poke fun at herself and with a panache that cannot be rivaled. From stealing daughter Masaba Gupta’s outfits to asking Google to rectify her age after getting a haircut to hilariously busting the rumour that she was ever approached for Pamela Anderson’s role in Baywatch, Neena always takes things in stride.

Now, in her latest post, the actress took a funny jibe at her stardom. 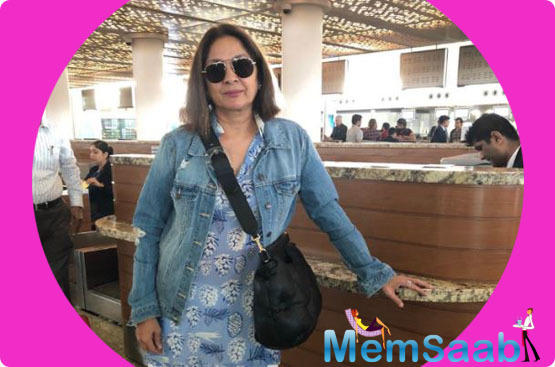 In This Image: Neena Gupta
She shared a picture of herself from the airport where she can be seen posing in front of the checking kiosk. She looked elegant in a blue kurta and white salwar paired with a denim jacket and black glares. However, it was her caption that captured our attention. She wrote, “Jab teen baar id dekha jata hai toe samajh mein aa jaata hai ki baby abhi tum famous aur successful nahin huee.”

However, her fans were quick to dismiss her claims and wrote that she is successful and famous. 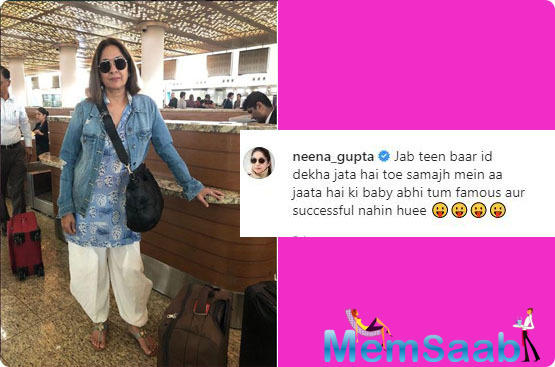 In This Image: Neena Gupta
A fan wrote, “Kaun kahta h ki aap famous nhi hue, id dekhne wala koi nadaan bachca hoga Neena ji. You r famous n loving lady at this stage also,” While another commented, “Who says you are not famous? You are the rule breaker woman that we admire.” Another wrote, “You are successful Beautiful and gorgeous you have your own fans.” Meanwhile, on the work front, Neena was seen in Ayushmann Khurrana starrer Shubh Mangal Zyada Saavdhan where she once again was paired opposite Gajraj Rao. The film also starred Jitendra Kumar and was directed by Hitesh Kewalya.
Latest Events