Galleries >> Khaali Peeli: This is when Ishaan Khatter and Ananya Panday's film will be out

Khaali Peeli: This is when Ishaan Khatter and Ananya Panday's film will be out | Memsaab.com

The makers of Ishaan Khatter and Ananya Panday starrer upcoming film 'Khaali Peeli' announced on Monday that the movie will be released over online streaming platform- Zeeplex on October 2.
The poster features the 'Student Of The Year' actor sitting on the bonnet of Mumbai's famous Kaali Peeli taxi with Ishaan Khatter in the driver's seat. A duffle bag full of jewellery and cash is atop the taxi and a pop-up one-liner reads, "Lafda bole toh alag level ka!!!."

The poster has a message written, "Ek ladka, ek ladki aur ek mad ride. (A girl, a boy and a mad ride). 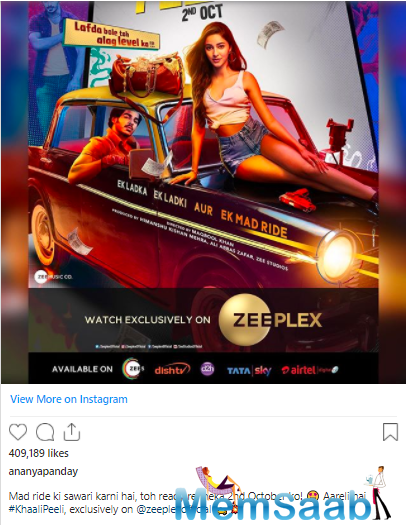 Last month, the makers of 'Khaali Peeli' dropped an action-packed teaser of the film featuring the lead duo -- Khatter and Ananya Panday. 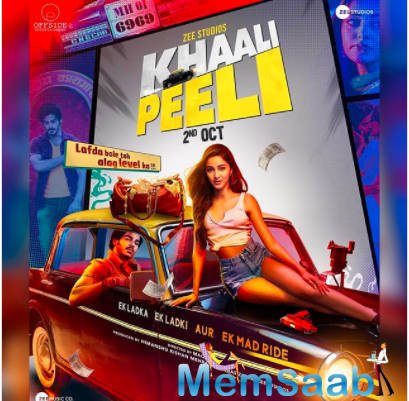 In This Image: Ishaan Khatter, Ananya Panday
The teaser of the film begins with a policeman sending out an alert of a boy and a girl having escaped in a black and yellow (Kaali Peeli) taxi numbered 6969 after creating a ruckus. Helmed by debutant director Maqbool Khan and backed by filmmaker Ali Abbas Zafar, Himanshu Mehra, and Zee Studios, the film also stars 'Paatal Lok' actor Jaideep Ahlawat. 'Khaali Peeli' went on the floors in September last year and was scheduled for a June 12 release but was delayed due to the shuttering of film theatres.
Latest Events