Galleries >> Kartik Aaryan fulfills his mother's wish, gifts her a brand new car on her birthday

Kartik Aaryan fulfills his mother's wish, gifts her a brand new car on her birthday | Memsaab.com

On the work front, Aaryan has Love Aaj Kal coming up with Sara Ali Khan on Valentine's Day, and fans are eager to see what different filmmaker Imtiaz Ali has made this time. After the release of this romantic drama, he'll gear up for the release of Bhool Bhulaiyaa 2 with Kiara Advani and Dostana 2 with Janhvi Kapoor.After the success of Sonu Ke Titu Ki Sweety, Luka Chuppi, and Pati Patni Aur Woh, it seems this young star has a long journey in the Hindu film industry.

Doting son Kartik Aaryan surprised mother Mala by gifting her a new set of wheels on her birthday. He was papped while taking her for a spin in the convertible in the suburbs. 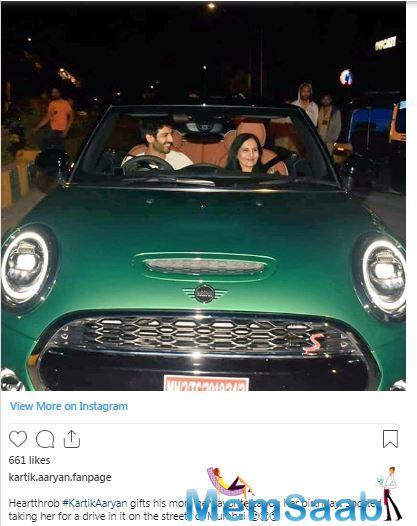 In This Image: Kartik Aaryan
Reportedly, The car in question is a brand new Green-Emerald Mini Cooper, and this was one car Aaryan's mother wanted to buy a long time back when the actor wasn't a part of the Bollywood industry

And Aaryan being a doting and an obedient son, promised to fulfill this wish of his mother. 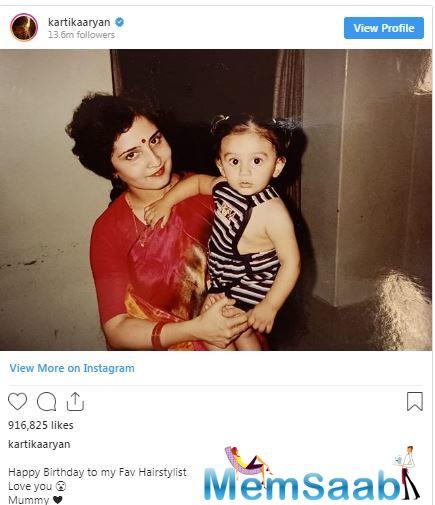