Boney Kapoor gets teary-eyed while unveiling wax statue of his late wife Sridevi in Singapore | Memsaab.com

On September 4, Sridevi's wax statue was unveiled at Madame Tussauds, Singapore, by her family - daughters Janhvi and Khushi and filmmaker husband Boney Kapoor. It was an emotional moment for the entire family, and to accompany them on this special day, Boney Kapoor's brother Sanjay Kapoor also attended the ceremony. Boney sobbed while speaking about Sri at the event. The wax statue is inspired by the late actor's look in the chartbuster Hawa Hawaii from Mr India (1987).

Madame Tussauds Singapore on August 13, on Sridevi's birth anniversary, shared the news on their social media page that they would be creating a wax figure of the late actress. 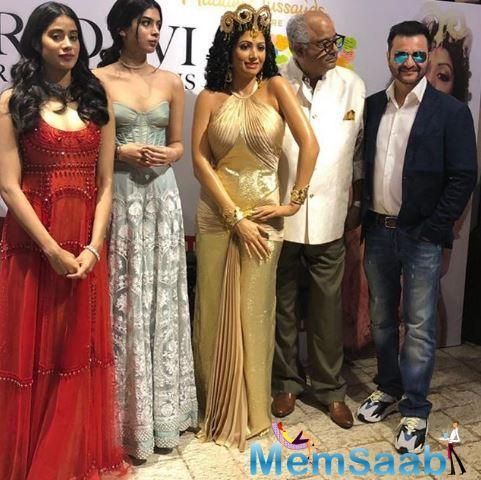 In This Image: Boney Kapoor, Janhvi Kapoor, Khushi Kapoor
Now, Sridevi's wax figure has finally been unveiled at Madame Tussauds Singapore. Sridevi's iconic dance 'Hawa Hawai' has been brought to life with her golden avatar and she looks stunning as she did then. The golden dress, makeup, her curly tresses and of course the tiara, everything has been recreated perfectly. Daughters Janhvi and Khushi Kapoor, along with dad Boney and uncle Sanjay Kapoor were at the unveiling of the wax statue. To share the news with fans, Boney Kapoor also shared a video on Twitter, which gave the fans a glimpse of the actress' wax idol.

Sridevi was born as Shree Amma Yanger Ayyapan in 1963, The actress was admired the world over for her performances in films like Chandni, Lamhe, Mr India, Chaalbaaz, Nagina, Sadma, English Vinglish, and so many more. 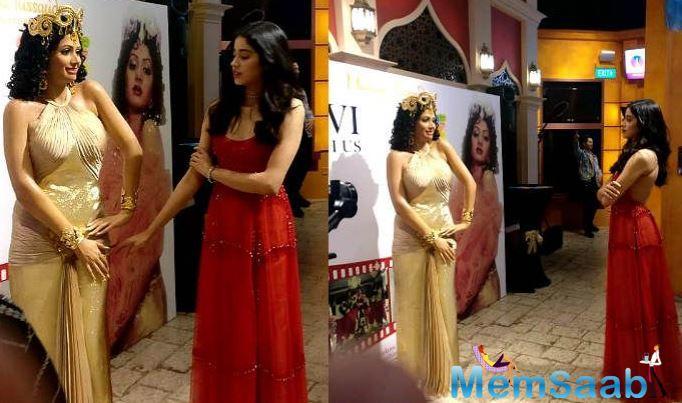 In This Image: Janhvi Kapoor
Sridevi was conferred with the Padma Shri and also did brilliant work in Tamil, Telugu, Malayalam and Kannada films. Sridevi's last film was Mom, and she received the Best Actress National Award for it, posthumously.

After stunning the world with her performance in Dhadak, Janhvi Kapoor will be next seen in The Kargil Girl', where the actress is portraying a real-life person for the first time in her career. 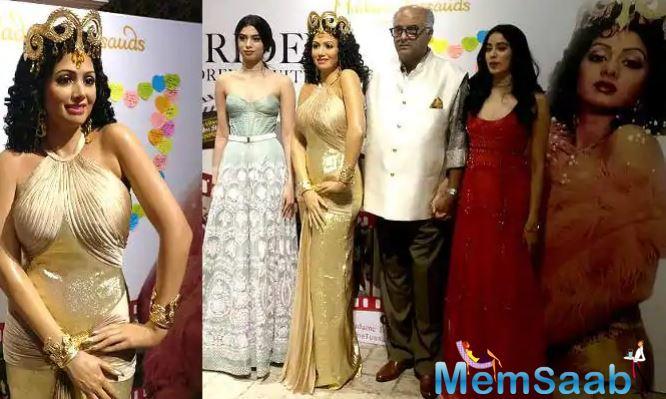 In This Image: Boney Kapoor, Janhvi Kapoor, Khushi Kapoor
Based on Gunjan Saxena, who is one of the first female pilots to fly in combat, Janhvi plays an important role in rescuing injured soldiers during the Kargil War in 1999 and was awarded the gallantry Shaurya Vir Award for displaying courage during the war. Directed by Sharan Sharma, The Kargil Girl also stars Vineet Kumar Singh, Angad Bedi and Manav Vij in pivotal roles. It is set to hit theatres on March 13, 2020. The upcoming biopic is produced by Dharma Productions and Zee Studios.
Latest Events