Yami Gautam: As soon as I hit the ramp, nervousness...

by Naved Qureshi 3 years ago3 years ago
10views
0

Yami Gautam: As soon as I hit the ramp, nervousness goes

On the film front, Yami will be seen in Batti Gul Meter Chalu and Uri.

Yami Gautam, who turned showstopper for designer Reynu Taandon in New Delhi on Sunday, says walking the ramp can be unnerving but she feels fine right after she takes to the runway. 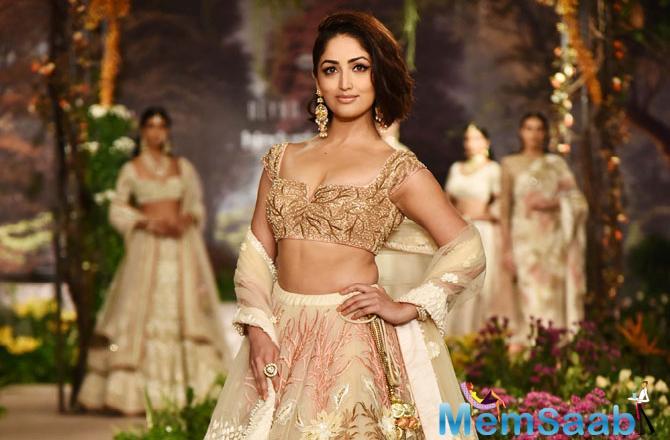 In This Image: Yami Gautam
The experience at India Couture Week was “really good”, said Yami, who looked chic in an ensemble from Taandon’s ‘Once Upon a Dream’ line, which was all about a blend of pastel tones, tender flora, intricate detailing and sequin work. Sporting a short hairdo, Yami flaunted a look which was a mix of traditional and contemporary.

Talking about it, the actress said, “When you think of Indian wear, everyone has long hair in the picture because that’s what we have in mind mostly… So I thought this will be cool to carry with an Indian outfit.”

In This Image: Yami Gautam
Does she get nervous before a fashion show? “Before the show, of course, especially when there are steps. One tends to get nervous because outfits as much as stunning they look, they are heavy, they have the cancan and layers and layers inside. So you don’t want to mess up the show, and want to be careful, feel balanced, relaxed, and have fun. I am nervous before the show, but as soon as I hit the ramp, I am fine,” she said, describing the show as “totally worth it”.