Varun Dhawan gives a glimpse of his ‘Haldi’ ceremony with...

Varun Dhawan gives a glimpse of his ‘Haldi’ ceremony with everyone posing in customised filmy T-Shirts!

Varun Dhawan tied the knot with long time love Natasha Dalal over the weekend in a hush-hush wedding. Giving fans an inside glimpse of pre-wedding festivity, the actor posted pictures from his ‘Haldi’ ceremony. From ‘Team Seenu’ to ‘Team Humpty’ and ‘Team Ragu’ – Varun Dhawan’s gang was snapped posing in T-shirts that were dedicated to Varun’s onscreen characters. ‘HALDI done right’ Varun had captioned a picture where he was posing shirtless, covered in Haldi.

Varun Dhawan and Natasha Dalal tied the knot in an intimate Hindu-Punjabi ceremony on January 24. 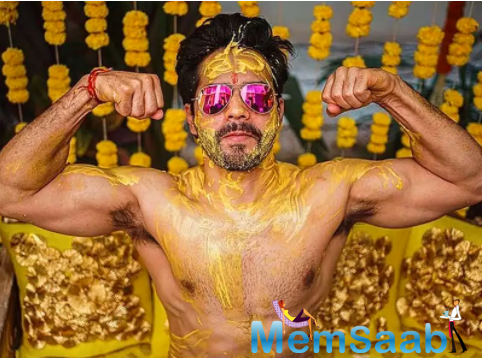 In This Image: Varun Dhawan
In the presence of close family members and friends, the couple exchanged vows at a lavish resort in Alibaug. Post their wedding, Varun and Natasha stepped out to pose for the paparazzi. The couple was decked in colour co-ordinated ensembles. Sharing pictures from his wedding, Varun had posted on Instagram, “Life long love just became official”. 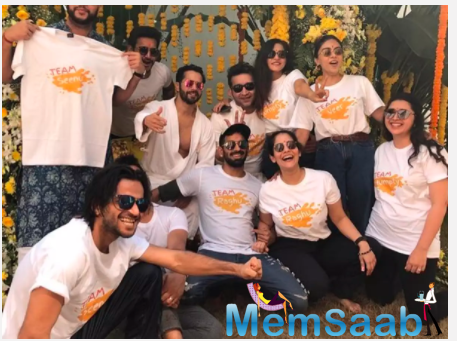 In This Image: Varun Dhawan
Buzz suggests that newly weds Varun Dhawan and Natasha Dalal are planning to host a grand wedding reception on February 2 in Mumbai for their friends from Bollywood.