Thank you all for the love given to ‘Tanhaji The...

Ajay Devgn expressed gratitude to the three military chiefs of the nation — Army, Navy and Air Force — for watching his latest film Tanhaji: The Unsung Warrior.

Tanhaji: The Unsung Warrior is creating a storm at the box office. The movie, which hit theatres on January 10, has collected over Rs 150 crores within just 10 days of release, and the buzz is it could end up as the biggest hit in Ajay Devgn’s career.

“Honoured to spend an evening with the three Chiefs. Thank you all for the love given to Tanhaji,” Ajay tweeted. 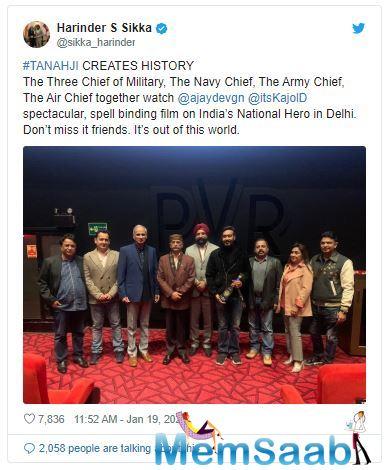 In This Image: Ajay Devgn
The screening was held in Delhi on Sunday evening. Harinder Sikka, author of Calling Sehmat on which Raazi was based, was also present. Ajay’s tweet cames in the wake of Sikka’s post on Twitter that read, “#Tanhaji creates history. The Three Chief of Military, The Navy Chief, The Army Chief, The Air Chief together watch @ajaydevgn, @itsKajolD spectacular, spellbinding film on India’s National Hero in Delhi. Don’t miss it friends. It’s out of this world.” In a separate tweet, Sikka, “It was my privilege to be part of Military tribute to great Indian warrior #Tanaji. Present on stage were Chief of Army, Navy & Air Staffs along with serving & retd military officers. Film should become a folklore. @ajaydevgn @itsBhushanKumar, @itsKajolD.” 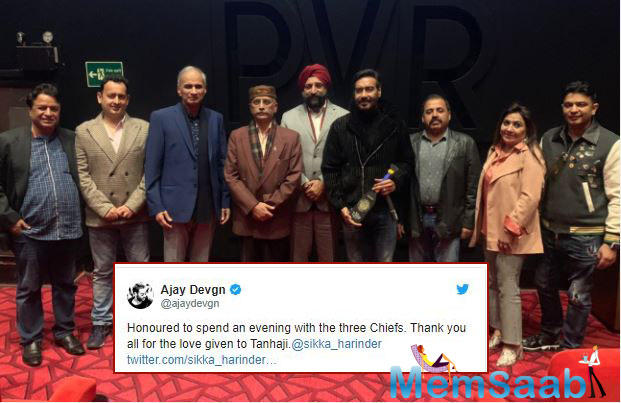 In This Image: Ajay Devgn
The Om Raut directorial stars Ajay Devgn in the title role along with Saif Ali Khan, Kajol and Sharad Kelkar in key roles.