Tanhaji – The Unsung Warrior: Kajol aka Savitribai’s piercing look might make you a little uncomfortable

Before they share the first rushes of Ajay Devgn led upcoming film Tanhaji – The Unsung Warrior, the makers have been teasing fans with different posters of the film. After introducing Ajay Devgn, Saif Ali Khan, and Sharad Kelkar among others, the makers have now dropped the first look poster of Kajol as Savitribai Malusare.

The off-screen wife of Ajay Devgn is all set to play his on-screen wife in Tanhaji Unsung Warrior. 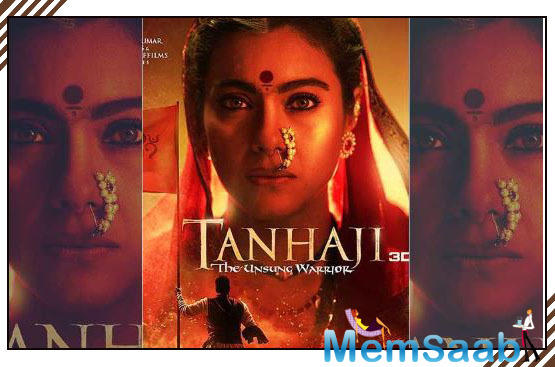 In This Image: Kajol Devgn
A while back, Ajay Devgn took to social media to share the first look of Kajol as Savitribai Malusare from Tanhaji – The Unsung Warrior and captioned it, “Savitribai Malusare – Tanhaji ke saahas ka sahara… aur unke bal ki shakti. #TanhajiTheUnsungWarrior in cinemas 10th January 2020. TANHAJI TRAILER TOMORROW @kajol #SaifAliKhan @omraut @bhushankumar #AjayDevgnFFilms @tseries.official @tseriesfilms @tanhajifilm” Earlier, when Saif Ali Khan’s look from Tanhaji was unveiled, netizens pointed out that it is a complete rip-off of Jon Snow’s poster from Game Of Thrones. Before that his look as Naga Sadhu from Laal Kaptaan, too, was compared to that of Hollywood’s Jack Sparrow.

Tanhaji is set in the 17th century, directed by Om Raut, it is based on the life of Tanaji Malusare, unsung warrior of glorious Indian history and the military leader in the army of Chhatrapati Shivaji Maharaj, founder of the Maratha Empire. 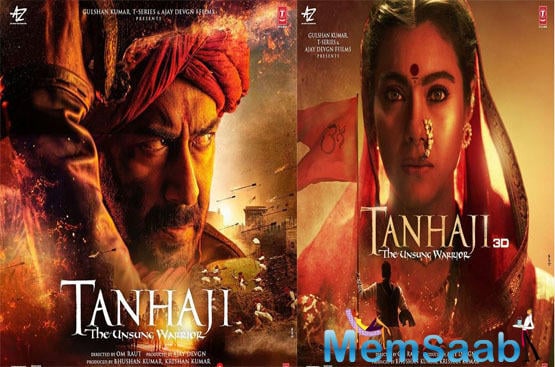 In This Image: Ajay Devgn, Kajol Devgn
Directed by Om Raut, the film will release on January 10, 2020. As reported, the film is currently slated to clash with the Deepika Padukone starrer ‘Chhapaak’