Priyanka Chopra attended the wedding ceremony of her brother-in-law Joe Jonas and Game of Thrones star Sophie Turner in France during the weekend in a pink sari. Pictures of the actor’s candid moments at the intimate wedding have surfaced online.

A new picture shows Priyanka standing beside husband Nick Jonas, as they take part in the wedding celebrations. 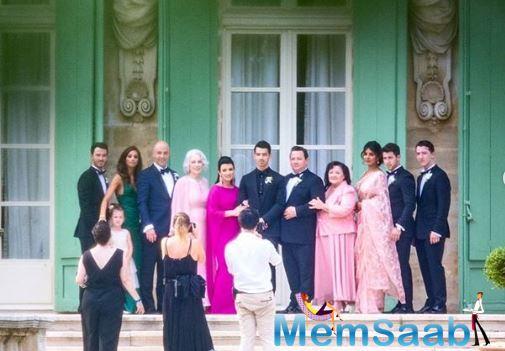 In This Image: Priyanka Chopra, Nick Jonas
While Nick is dressed in a tuxedo, Priyanka is in a pink Sabyasachi sari and a sleeveless blouse, with her hair tied in a bun and accessorised with nothing but a rose. She seems to have become emotional during the ceremony and is seen wiping tears. However, a few fans joked in the comments section of the Instagram post that since the temperatures in France are at an all-time high, she was wiping off sweat instead.

There are also glimpses of Priyanka clicking selfies and posing for pictures ahead of the wedding. Other guests can also be seen in the vicinity. 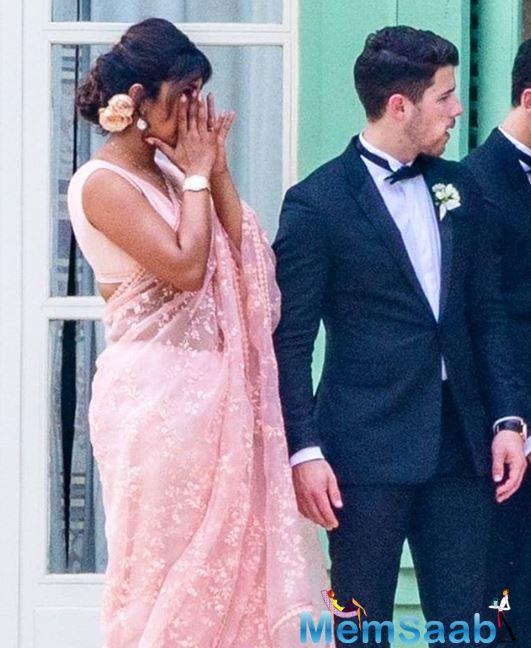 In This Image: Priyanka Chopra, Nick Jonas
Earlier, a group picture of the newlyweds with the entire Jonas family, including brothers Kevin Jr with wife Danielle, Nick and Priyanka and Franklin and their parents, Kevin Sr and Denise was shared on fan pages.

The wedding was a highly guarded, private affair with only close friends and family in attendance.

In This Image: Priyanka Chopra, Nick Jonas
Sophie and Joe tied the knot for the second time at Château du Martinay in Carpentras in southern France. Despite no pictures from the wedding surfacing online, one picture of Sophie walking in a white gown with a veil and Joe Jonas beside her was leaked.