Priyanka Chopra had a very busy week this month. After attending the premiere of her upcoming film, The Sky Is Pink in Toronto and celebrating her hubby’s Nick Jonas birthday in the US, PeeCee then flew to Milan where she attended Vogue Japan’s 20th-anniversary celebrations and the Bvlgari party in Milan, on the heels of the Milan Fashion Week on Wednesday. The actress even shared a few snaps with JC Cabin on her Instagram handle.

While sharing it, she captioned it, “Thank you @bulgariofficial for a magical evening! Was lovely celebrating @voguejapan’s 20th anniversary. Cheers to 20 more! @jc.babin it was so great to see you and reconnect after so many years!” 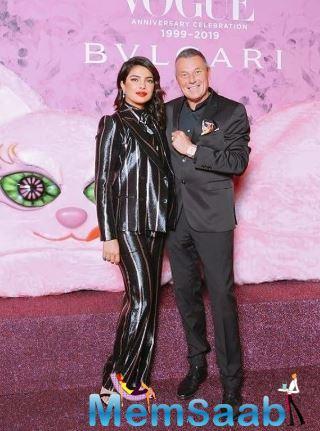 In This Image: Priyanka Chopra
In the photos, Priyanka is seen wearing a glossy striped blazer suit which appears to be leather. Though we are not a big fan of this attire, Priyanka does seem to carry it off pretty well, despite her outfit being a big turn off. Meanwhile, Mrs Chopra Jonas whose hubby Nick Jonas celebrated his 27th birthday with much grandeur, had painted a beautiful picture for his birthday celebration, starting with the beautiful montage of their romantic moments that she posted on Instagram to wish Nick on his birthday! A fancy cake that definitely stole the show at Nick’s grand birthday bash. Earlier, a fan page had also shared a video of Nickyanka celebrating the birthday Bollywood style and dancing to the song Hauli Hauli.

On the work front, the actress will be seen playing a mother to Zaira Wasim and Rohit Saraf and wife to Farhan Akhtar in The Sky Is Pink. 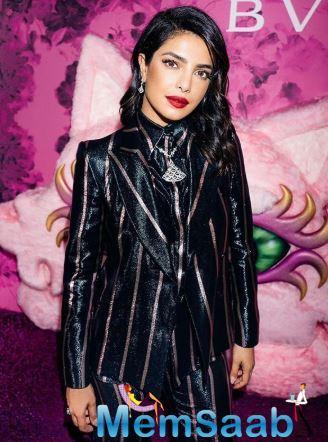 In This Image: Priyanka Chopra
The film which was premiered at TIFF received a standing ovation from the crowd in Toronto. The trailer of TSIP too received a lot of appreciation for its beautiful story and is slated to hit the big screens on October 11, 2019.