Photos: Alia Bhatt’s stunning saree look is sure to drive...

Photos: Alia Bhatt’s stunning saree look is sure to drive away your Monday blues

Alia Bhatt is one of the most versatile and bankable actresses we have in Bollywood. Apart from her brilliant performances, the actress never fails to impress her fans with her impeccable fashion sense. She recently took to her Instagram handle to share a few pictures with her fans and it is sure to drive away your Monday blues. In the pictures, Alia can be seen looking pretty as a peach in her multi-coloured saree as she dolled up for an event.

With her hair tied into a simple bun, round bindi on her forehead and matching ethnic jhumkas, Alia paints a pretty picture and is most definitely a sight for the sore eyes. 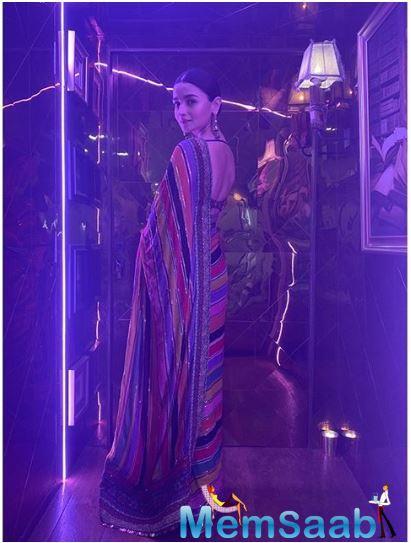 In This Image: Alia Bhatt
Meanwhile, on the work front, Alia has some interesting projects in her kitty. She is currently shooting for Ayan Mukerji’s ‘Brahmastra’. Alia Bhatt will be seen sharing screen space with beau Ranbir Kapoor in the film for the first time. The movie also features Amitabh Bachchan, Dimple Kapadia, Nagarjuna Akkineni and Mouni Roy in pivotal roles.

Apart from that, Alia will also be seen in Sanjay Leela Bhansali’s ‘Gangubai Kathiawadi’. 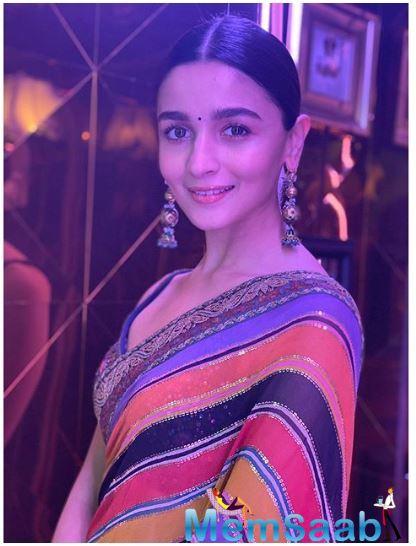 In This Image: Alia Bhatt
She will also be teaming up with her father Mahesh Bhatt for the first time for ‘Sadak 2’. The movie stars Pooja Bhatt and Sanjay Dutt as the original cast. Apart from them, it also features Alia Bhatt, Aditya Roy Kapur, Gulshan Grover and Makrand Deshpande. Alia is also a part of SS Rajamouli’s much-talked-about film, ‘RRR’ which also stars Ajay Devgn in pivotal role.