Madhuri Dixit pens note for Hubby Sriram Nene on their...

Madhuri Dixit pens note for Hubby Sriram Nene on their Wedding Anniversary: We are so different yet so alike

Madhuri Dixit and Sriram Nene tied the knot on October 17, 1999. The duo never shies away from expressing their love for each other on social media, and today is no exception. After all, it’s their 21st marriage anniversary. To celebrate this special day, Madhuri took to her Instagram account to pen down an adorable note for Sriram alongside a few throwback pictures of themselves. In the pictures, the couple is seen in traditional outfits while the next is taken in an unknown outdoor location.

She wrote in her caption, “Today marks the beginning of another year, full of adventures with the man of my dreams. We are so different yet so alike & I am grateful to have you in my life. Happy Anniversary to you & us Ram.” 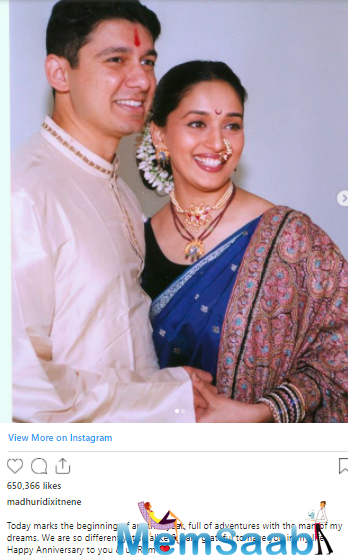 In This Image: Madhuri Dixit, Sriram Nene
Shriram also wished his ‘soulmate’ Madhuri a happy anniversary. Sharing a throwback picture of them, he wrote, “21 years ago, found my soulmate and started on our journey together. Every day is amazing and look forward to many more adventures together. Happy 21st Anniversary.”

Celebrities and fans poured in wishes for the couple in the comment box. 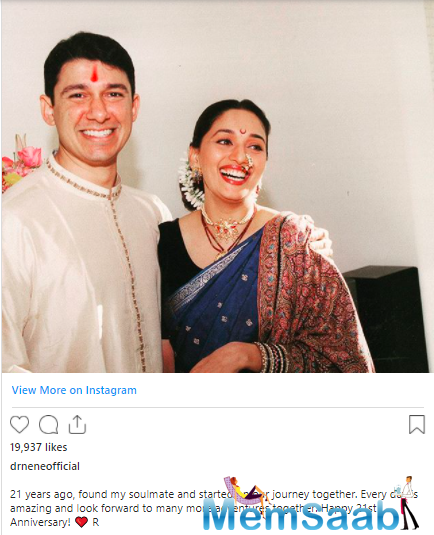 In This Image: Madhuri Dixit, Sriram Nene
On the film front, Madhuri was last seen on screen in the 2019 film Kalank, which also starred Sanjay Dutt, Varun Dhawan, Alia Bhatt, Sonakshi Sinha, and Aditya Roy Kapur. During the lockdown, she made her singing debut with an English song titled Candle.

In a media interaction, Madhuri shared how her kids give their expert advice on her work. 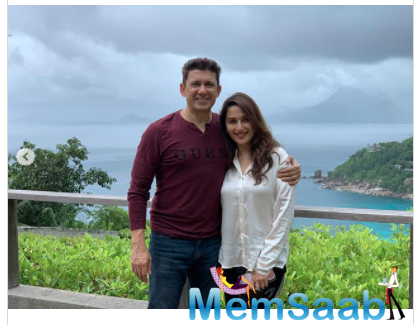 In This Image: Madhuri Dixit, Sriram Nene
The teenagers also suggested a few changes in her singing debut Candle. “Not that they have watched a lot of my films now, they haven’t, but if I do something, and if they have to criticise it, they do that. They comment on it, tell me if it is cheesy, if it is not right.”