On Friday, Sara Ali Khan walked the ramp for the India Couture Week in New Delhi. Accompanying her to the event were Kartik Aaryan and her brother Ibrahim Ali Khan. This is Sara’s debut on the ramp and both, Kartik and Ibrahim, who were seen sitting in the first row were excited for Sara.

A video from the fashion show has surfaced on social media and Kartik Aaryan’s wide smile refuses to cease as he sees Sara Ali Khan making heads turn. 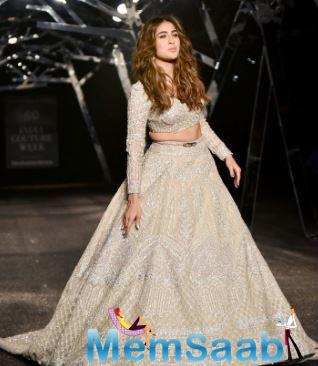 In This Image: Sara Ali Khan
Dressed in an ivory studded lehenga, the Kedarnath actress looked gorgeous. She had her hair parted in the middle and left open with soft curls.

Sara Ali Khan walked the ramp like a professional and greeted everyone with a ‘namaste’ and an ‘aadaab’. Pictures and videos from the event have been dominating social media now. 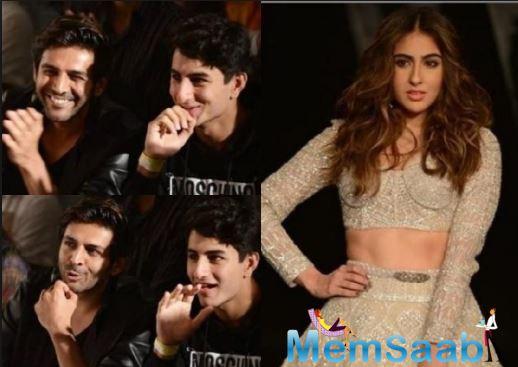 In This Image: Kartik Aaryan, Ibrahim Ali Khan, Sara Ali Khan
Kartik and Ibrahim’s bond is something fresh that the audience will get to witness. While there are reports of Kartik and Sara dating each other, it’s interesting to see the Luka Chuppi actor share a friendly rapport with Ibrahim.

Here is the video that has Sara walking the ramp like a diva while Kartik and Ibrahim are seen cheering for her. 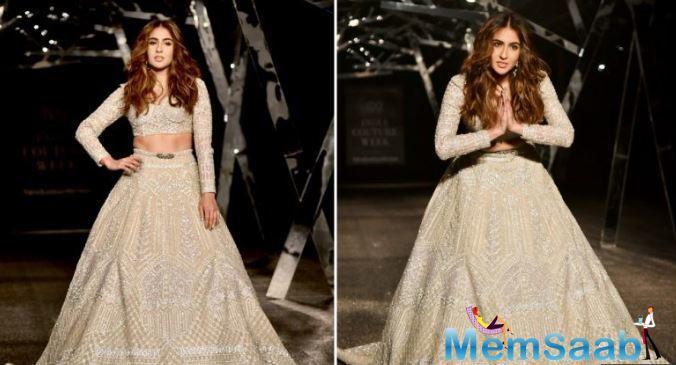 In This Image: Sara Ali Khan
A few days ago, Sara travelled to Lucknow to meet Aaryan and a video from there also made its way to social media. In the video, Kartik was seen getting protective of Sara and how he kept her from getting mobbed by fans present there. After their Lucknow visit, they are seen here in New Delhi together for her debut on the ramp. 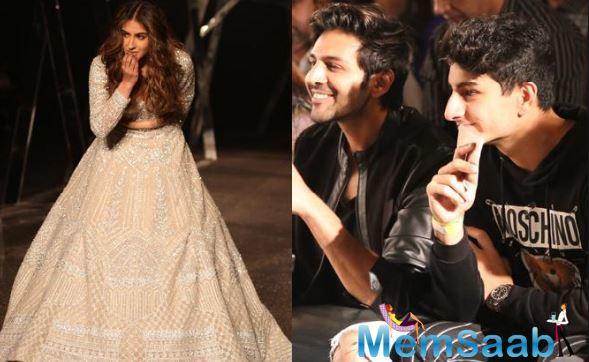 In This Image: Kartik Aaryan, Ibrahim Ali Khan, Sara Ali Khan
In the video, the show’s host, Amitabh Bachchan, is seen asking Sara to greet him with an aadaab. The graceful aadaab by Sara Ali Khan is loved by many in the film industry.