Janhvi Kapoor loves to keep fans updated about her life through regular posts on Instagram. Now, she took to the photo-sharing app to post pictures of herself enjoying in the woods.

She looked pretty in a white t-shirt teamed matching pants and brown boots. She captioned the post, “Cold/mess.” Soon, fans of the actress showered love in the comment section of the post.

In This Image: Janhvi Kapoor
Meanwhile, owing to security concerns in the wake of an incident in Patiala where a group of angry farmers disrupted the shoot of Janhvi Kapoor starrer film ‘Good Luck Jerry’, the production house decided to move the shooting to Chandigarh, about 70 km from Patiala, to film the remaining sequences.

On the other hand, she will next be seen in ‘Dostana 2’, which will see paired opposite Kartik Aaryan for the first time. 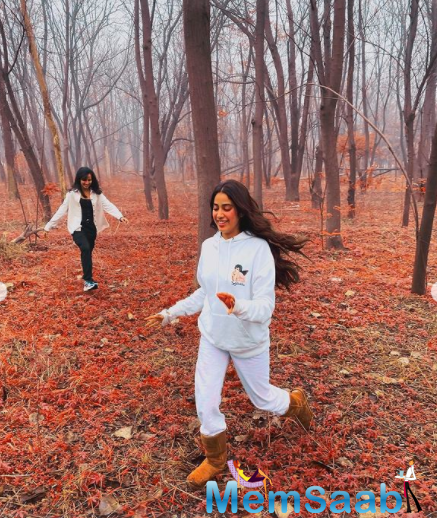 In This Image: Janhvi Kapoor
Backed by Karan Johar, the film will also star Lakshya.