Janhvi Kapoor looks radiant as she shares a glimpse of...

Janhvi Kapoor looks radiant as she shares a glimpse of her winter morning from Punjab; see pic

Janhvi Kapoor who kickstarted the new year by resuming work for her upcoming film ‘Good Luck Jerry’, is currently in Patiala, Punjab shooting for the same. Today the actress took to her Instagram story to share a mesmerising selfie of herself from the film set where she is seen glowing during the chilly winter morning.

In the picture, the ‘Dhadak’ actress is seen all covered with a jacket, scarf, and other warm clothes as she poses for the camera with her enticing looks. 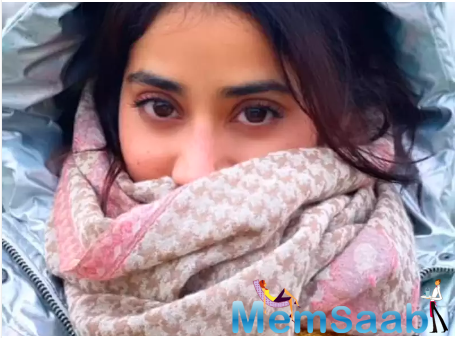 In This Image: Janhvi Kapoor
It further reads ‘8 °C’ as the temperature of the place when the picture was taken.

Meanwhile, Janhvi has been sharing several glimpses from the film set as she continues to shoot in Punjab. 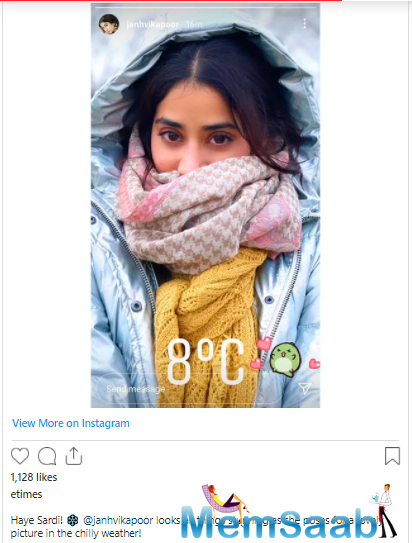 In This Image: Janhvi Kapoor
Talking about ‘Good Luck Jerry’, the film is said to be adapted from the Tamil hit ‘Kolamaavu Kokila’ starring Nayantara where Janhvi Kapoor will be essaying the lead role. Earlier, filmmaker Aanand L Rao took to his social media handles to share the first official still of Janhvi from the making of the film and announced, “Colour Yellow welcomes 2021 with #GoodLuckJerry starring @janhvikapoor!” Besides, Janhvi Kapoor will also be seen in Roohi Afza’ with Rajkummar Rao and ‘Dostana 2’ with Kartik Aaryan and Lakshya this year.