Huma Qureshi rocks the casual look with a trendy fanny...

Bollywood’s diva Huma Qureshi was one of the first actresses to begin shooting in the pandemic for the multi-starrer Bell Bottom starring Akshay Kumar, Lara Dutta, and Vaani Kapoor. Directed by Ranjit M Tewari, the film is said to be the first film in the world to begin and wrap up the entire shoot in the pandemic. On Monday, we spotted Huma Qureshi rocking the casual look as she was all set to board her flight.

The actress was in the city to wrap up the shooting schedule of Thala Ajith starrer Valimai directed by H Vinoth. 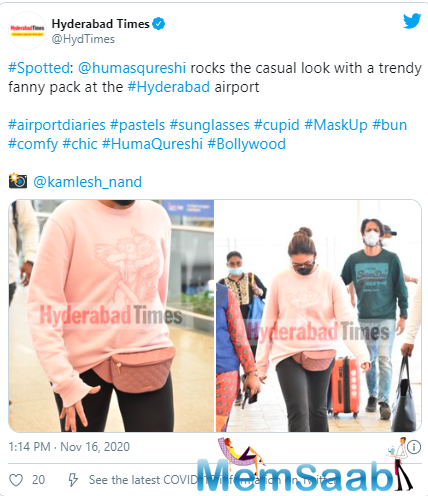 In This Image: Huma Qureshi
The Gangs of Wasseypur actress opted for a peach sweatshirt with cupid art on it and paired it with black comfy track pants. She tied her hair in a simple bun and added a bit of sass to the outfit with her peach-coloured fanny pack and her tinted sunglasses. Huma, who has always encouraged her fans to be comfortable in their skin and fashion choices seems to be following her own advice.

The actress, who was last seen in the Tamil film Kaala will soon be seen on the big screen in Bell Bottom. 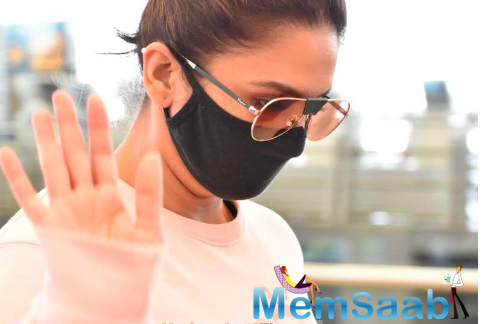 In This Image: Huma Qureshi
As the world unlocked, the Badlapur actress decided to jump off a chopper and experience skydiving in Dubai after wrapping up the shoot for Bell Bottom in Scotland. It was her dream to fly and now she knows she can. The actress took to Insta to share the video and wrote, “Always wanted to fly .. and now I have !!”.