by Angel Sharma 1 year ago1 year ago
9views
0

Sushant Singh Rajput has been hitting the headlines for a long time now for his rumoured relationship with girlfriend Rhea Chakraborty. Although the two have refrained from talking about their relationship in open, their social media PDA, outings and dinner dates speak volumes about their love affair.

Today, on the occasion of Sushant Singh Rajput’s birthday, ladylove Rhea took to her Twitter handle to share an adorable picture of them together along with a lovely birthday wish. 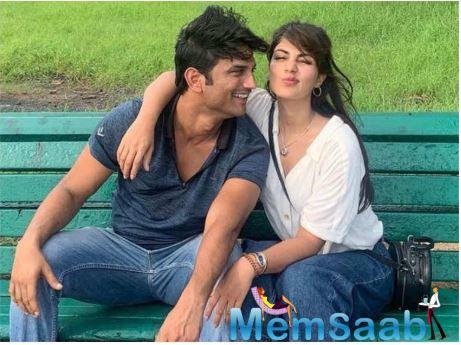 In This Image: Sushant Singh Rajput, Rhea Chakraborty
In the photo, Sushant and Rhea can be seen sitting on a bench in what looks like a park. With her one hand around Sushant’s shoulders, Rhea strikes a goofy pose with a quirky expression on her face. Sushant, on the other hand, is seen looking at her smilingly.

While Rhea looks pretty as a peach in her white top and denim pants, Sushant looks dapper in his blue tee and jeans. 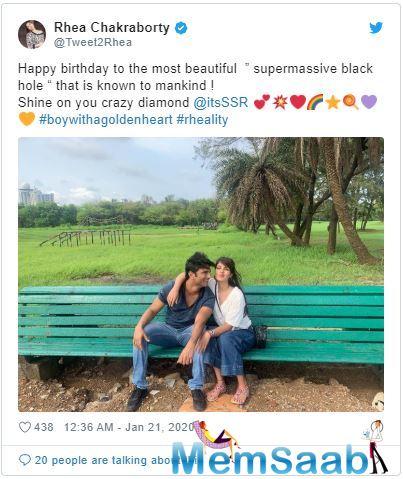 In This Image: Sushant Singh Rajput, Rhea Chakraborty
She captioned the post as, ‘Happy birthday to the most beautiful ” supermassive black hole “ that is known to mankind ! Shine on you crazy diamond @itsSSR boywithagoldenheart #rheality’

No sooner did she share the post on the social media, comments started pouring in from all sides. While some called her “Bhabhiji”, some others commented by saying that they look “awesome” together. 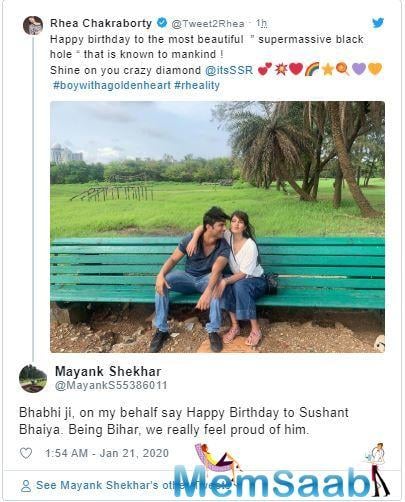 In This Image: Sushant Singh Rajput, Rhea Chakraborty
On the work front, Sushant will soon be seen in Mukesh Chhabra’s ‘Dil Bechara’ with Sanjana Sanghi. It is the official remake of Hollywood film ‘The Fault in Our Stars’.