Check it out! Who had Kartik like, friend-zone or block...

Check it out! Who had Kartik like, friend-zone or block in Kareena Kapoor Khan’s Show

There has been a lot of talk about Sara Ali Khan being in a relationship with Kartik Aaryan. While the two of them never made their relationship official, their social media posts and frequent outings made it apparent that they were together. From lunch dates to seeing each other off at airports, the couple’s small gestures managed to grab eyeballs.

Recently, news had surfaced that Sara and Kartik had called it quits to focus on their individual careers. According to reports, the couple had requested the paparazzi to not click them together. 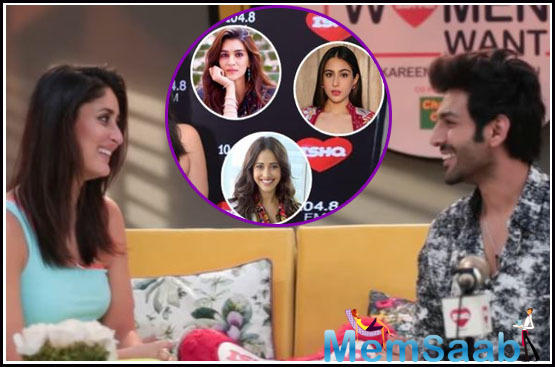 In This Image: Kartik Aaryan, Kareena Kapoor Khan, Sara Ali Khan, Kriti Sanon, Nushrat Bharucha
They wanted to be known for their work and not just their romance. Meanwhile, Kartik featured on Kareena Kapoor Khan’s radio show What Women Want. During the show, Kareena, who happens to be Sara’s step-mother quizzed Kartik whether he has ever used a dating app. On this, the actor responded in negative. Bebo quickly replied and teased him and said, “Especially now, I don’t think you should be on a dating app”. So is Kareena hinting that Kartik is still in a relationship?

The duo also played fun games on the chat show. In one of the games, Kartik had to either like, friend-zone or block an actress. 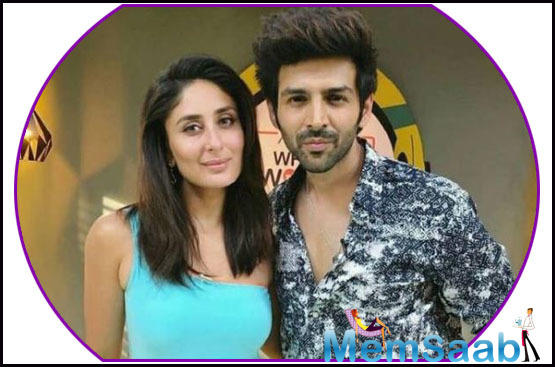 In This Image: Kartik Aaryan, Kareena Kapoor Khan
And no surprises for guessing, Bebo’s first name was Sara Ali Khan. The Pyaar Ka Punchnama actor blushed and gave a ‘Like’ comment. So is something brewing up between Kartik and Sara? Guess, someone apart from the two knows the full story.

We will be able to see the romance between the young actors in their upcoming film, Love Aaj Kal 2. The romantic drama is directed by Imtiaz Ali and stars Kartik, Sara and Randeep Hooda in lead roles. The film is set to release early next year. 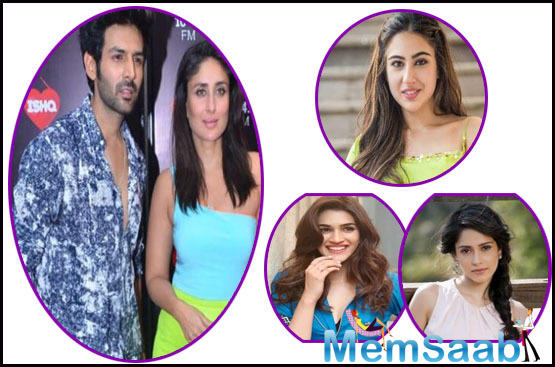 In This Image: Kartik Aaryan, Kareena Kapoor Khan, Sara Ali Khan, Kriti Sanon, Nushrat Bharucha
Apart from this film, Kartik has Bhool Bhulaiyaa 2 coming on July 31, which will be followed by Dostana 2. He was last seen romancing with Bhumi Pendnekar and Ananya Panday in recently released Pati Patni aur Woh.