Coming off from two back-to-back successes, Ali Abbas Zafar is nervous about the expectations surrounding “Bharat”, his third collaboration with Salman Khan.

In This Image: Salman Khan, Ali Abbas Zafar
The director says it is natural for people to expect him and Salman to strike gold after two superhits — Sultan and Tiger Zinda Hai — together. “With ‘Tiger Zinda Hai’ and ‘Sultan’ behind me, I’m more nervous for my next one because I know the expectations and anticipations will be really, really high,” Ali told PTI. The human-drama is a remake of the 2014 South Korean film “Ode To My Father”.

“It is a very different film from ‘Tiger’ and ‘Sultan’. We are trying to do something new with it. It’s too early to talk about it,” he said when prodded about “Bharat”.

“The text that I write kind of compliments (him) and he as a mature actor takes it to another level.” 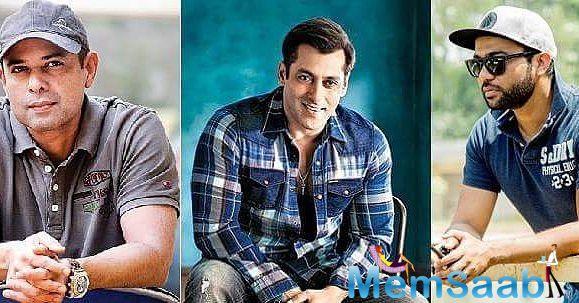 In This Image: Salman Khan, Ali Abbas Zafar
While today he and the superstar stand as one of the most formidable director-actor duos in Bollywood, Zafar’s first meeting with Salman – some seven-eight years ago – was about everything else but work. “My first ever meeting with him was through Katrina (Kaif). She was there in my first film (‘Mere Brother Ki Dulhan) and we went to his house, somewhere in 2010-2011.

“We just had a very normal, regular conversation. At that point of time I had no idea I am going to make films with him.

In This Image: Salman Khan, Ali Abbas Zafar
“He was a huge star and I was just starting my career. We had a nice chat about life and world but not about cinema. He asked me where do I come from, what I want to do.” Talking ahead of the world television premiere of “Tiger Zinda Hai”, scheduled for March 18 on Sony Max, Zafar feels “liberated and uplifted” after the film became a blockbuster.

“Success pushes me to work even more hard. Everything now will create more anticipation, we will have to pull our socks up and work harder to meet those expectations. “

In This Image: Salman Khan, Ali Abbas Zafar
But when a film releases and you detach yourself from it, you can see the film more analytically and understand what worked and what didn’t. That is a big learning exercise which always happen when you watch the film three-four months after its release.”