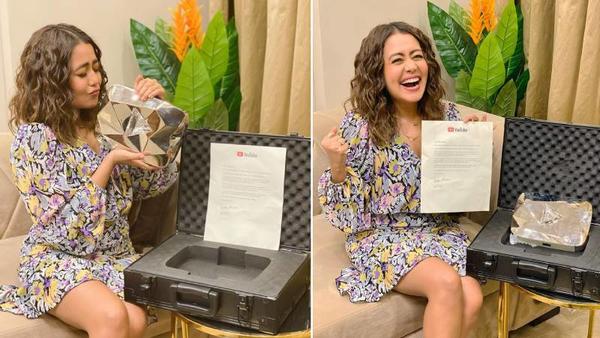 Neha Kakkar has persistently remained in the news since the last few years, which is a likeness of her growing popularity and success in her singing career. Her music videos have been gaining increased viewership especially among the younger audience.

Neha Kakkar has rapidly made her own space on YouTube, having released a number of songs that have gone viral and gained popularity on the social media platform. Unsurprisingly, that has resulted in YouTube conferring its Diamond Award on the singer for bringing in such a large viewership on her own. She has posted a few pictures of herself displaying the award, along with a message for her family and supporters in the caption of the post. One of the photos shows her holding the award with the briefcase in which it arrived still being open, along with a letter of YouTube.

In the caption of the post, she began by thanking her parents, sister Sonu Kakkar and brother Tony Kakkar. She thanked her fans by saying that she would not have won the award without their support. She also thanked YouTube for conceding her this award. Creating a new record for herself and for others, Neha Kakkar has become the first Indian singer to have won this award. Neha Kakkar’s YouTube channel has acquired close to 12 million subscribers and the singer seems to be enjoying every bit of her success.

Neha Kakkar Comes Clean About Her Feelings for Rohanpreet Singh

Neha Kakkar: Life becomes more beautiful when your partner is a beautiful human being