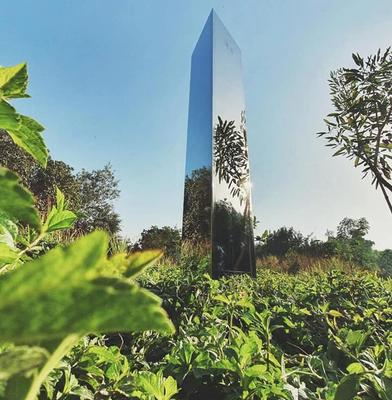 In the past few months, enigmatic monoliths appeared in several corners of the world, from United States to United Kingdom and Romania to latest in The Netherlands and Colombia. Captivatingly, most of these monoliths disappeared a day after it was spotted. This entire string of its sudden emergence and disappearance caught the world's attention.

In the latest progresses around the mystery surrounding it, a monolith has now appeared in a garden in Ahmedabad city, Gujarat. This is the first appearance of a monolith, a structure made of shiny steel sheets, in India. However, unlike in other parts of the world, the mystery around the object did not last long as it was unveiled that a private company has installed it. The triangular prism-shaped structure, around seven feet tall, supposedly has some numbers imprinted on it, although it's not yet clear what these numbers symbolize.

The seven-foot tall structure became a direct hit among city dwellers as soon as it was mottled in a garden on SG Highway on Thursday morning. The Ahmedabad monolith is marginally different from the similar structures came up elsewhere in the world, as its metal has been engraved with an added detail – a code to crack. On one of the sides of the structure has a sequence of numbers, it is unclear what they represent.

The monolith was installed at Symphony Forest Park on December 29, but it grew popularity on Thursday with people flocking to the garden.

Have You Seen Vikrant Massey's New Sci-Fi 'Cargo' on Netflix?

All You Wanted to Know About the Disappearing Whatsapp Messages

In a victory for women

Shootout At Wadala Team Promoting Their Film At Ahmedabad

Bipasha,Esha and Emraan in Ahmedabad For Raaz 3 Promotion

Ajay and Abhishek Spotted at Ahmedabad To Promote Bol Bachchan