2 of 4 Demands Resolved in Government's Talks With Farmers 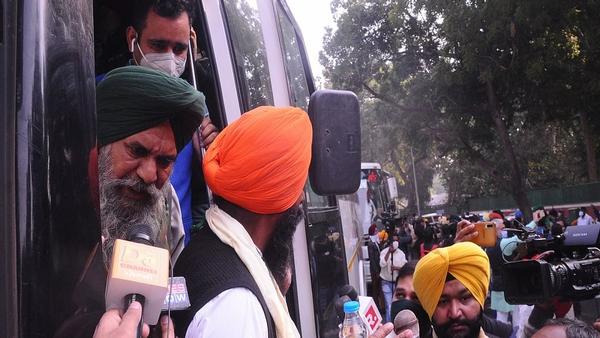 The sixth round of talks between the Modi government and the farmer unions saw some movement Wednesday with the Centre supportive to two of the four demands raised by the unions.

While the government has refused to rescind the three farm laws, it has agreed to exclude farmers from the penal provisions of the Commission for the Air Quality Management in National Capital Region and Adjoining Areas Ordinance 2020. It has also settled to not pursue the draft Electricity Amendment Bill 2020.

The next round of talks has been scheduled for 4 January. The five-hour long meeting Wednesday was held between councils of 40 farmer unions and Agriculture Minister Narendra Singh Tomar, Railways Minister Piyush Goyal and MoS Commerce and Industry Som Prakash. “The meeting was held in a very positive environment,” Jagmohan Singh Patiala, general secretary, Bharatiya Kisan Union (Dakonda) told the media.

"Issues related to stubble burning and electricity were sorted in today's meeting. But two of our main issues still need to be resolved. We will discuss topics related to MSP and repealing of three farm laws in the next meeting on 4 January," said Rakesh Tikait, the spokesperson of Bhartiya Kisan Union (BKU).

The last round of talks was held on 5 December after which the stalemate continued with the farmers unwilling to relent on their demand to repeal the three laws, while the government only agreed to make amendments.

Thousands of farmers have been protesting against the three farm laws for over a month at Delhi’s borders. We are hoping that the next meeting becomes a road movement for farmers.

Now You can Buy Land in J&K if You Wish to!

Union Budget 2019 - How This Budget Will Affect You?

Did You Hear That There is Now a Cap on Weight of School Bags???

Randeep Hooda prays for farmers who lost their lives, hopes for a speedy resolution

Dharmendra: I am extremely in pain to see the suffering of my farmer brothers

Salman Khan drops a hint alluding to the farmers' strike

Biopic on Rajyavardhan Rathore to be named Khiladi: Karan Johar

UPA Done In By Its Own Ministers!