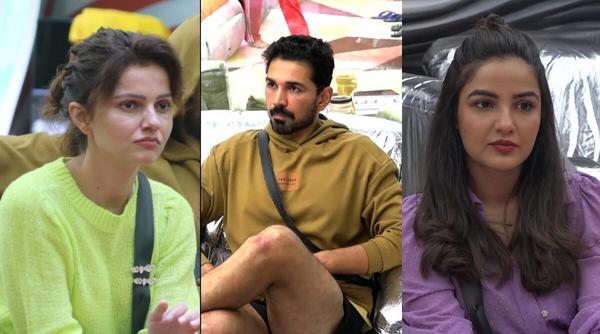 All but 3 housemates are nominated this week!

In an interesting task, housemates were given a bird that signified another housemate. During the task a buzzer would go off and one of the housemates could go into the nominations room and place the parrot given to them in a cage. This would nominate the person that was signified by this parrot. The buzzer would go off 6 times. Since there are 9 remaining housemates now and Kavita had immunity by the virtue of being captain, this meant that 2 people could remain safe from these nominations.

Nikki Tamboli was given Aly Goni's parrot and JAsmin Bhasin had Nikki Tamboli's parrot. The two immediately made a pact to stay out of this nominations task, thereby keeping both Nikki and Aly safe this week.

Pavitra Punia was given Jasmin's parrot, which she quickly put in a cage and accused Jasmin of being too judgmental. Eijaz Khan was given Abhinav Shukla's parrot, Rahul Vaidya had Eijaz' parrot and Abhinav had Rahul's parrot. Eijaz Khan tried hard to make apact between the 3 of them to keep each other safe by Abhinav did not agree, he was sure that he would nominate Rahul. So Rahul nominated Eijaz and Abhinav nominated Rahul. Irked with Rahul's decision, Eijaz decided to not nominate Abhinav.

Pavitra was nominated by Rubina and one last nomination remained. But since neither Nikki nor Jasmin nor Eijaz wanted to go and nominate someone, the captain Kavita offered a deal to Eijaz. She offered to him that she would save him when given a chance, if he would go in a complete the task successfully. So after Eijaz nominated Abhinav Shukla, Bigg Boss gave Kavita the chance to swap one nominated contestant with one of the remaining ones. So Kavita saved Eijaz and put Aly in this week's nominations.

So finally, Kavita, Nikki and Eijaz are safe and everyone else is nominated!

Eijaz Khan May Be Next in Line to Exit BB14

These are the 4 Finalists in Bigg Boss 14!

Is Deepika Padukone stealing the spotlight for Padmavati?