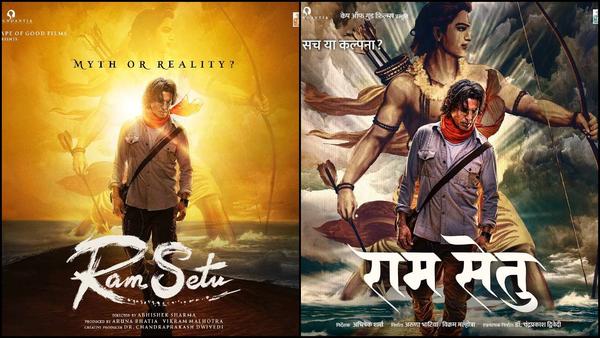 Akshay Kumar had a special Diwali gift for fans on Saturday. He announced his new project, titled Ram Setu. Akshay Kumar took to twitter to publicize his next film, Ram Setu.

Akshay shared two posters of his just-announced project, one in Hindi and the other in English. The poster sees the actor sporting a long hairdo with a saffron scarf round around his neck. He seems to be rambling down a narrow strip of land that divides what appears to be the ocean. In the background of the poster is an image of Lord Ram.

The announcement was made on the occasion of Diwali as Kumar's post read, “This Deepawali, let us endeavor to keep alive the ideals of Ram in the consciousness of all Bharatiyas." Akshay is co-producing the film with Abduntia and Vikram Malhotra. Chandraprakash Dwivedi is the creative producer of the film. Plot and cast details are yet be disclosed.

For people who don’t know, Akshay also wrapped up shooting one of his upcoming films, Bell Bottom in Scotland. The actor has now resumed shooting for the period drama, Prithviraj. Former Miss World Manushi Chillar stars opposite him in the role of Princess Sanyogita. Kumar also has an action-comedy titled Bachchan Pandeyand Rohit Shetty's Sooryavanshiin his pipeline.

Akshay Kumar gets nod to shoot in Ayodhya for Ram Setu

Akshay Kumar 'challenges' who can prove his meeting with Gurmeet Ram Rahim, Sukhbir

Akshay is Back in Action With Boss!
LATEST EVENTS / GALLERIES
Most Read
...loading