Twitter is Outraged and Angry With American Rapper Cardi B! 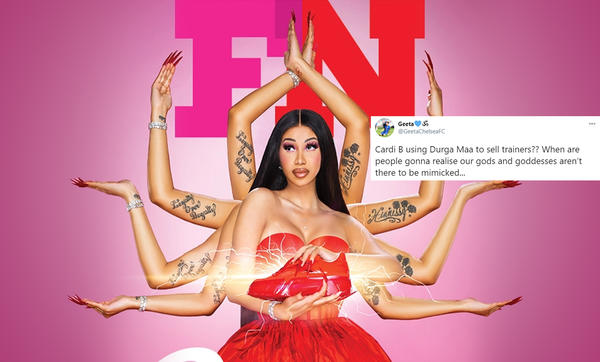 Rapper Cardi B is known to blending up with controversy quite often. So, once again she found herself in the middle of one and this time it occurred after the rapper set out to endorse her debut sneaker collection with Reebok.

The 28-year-old rapper posted a picture posed as Hindu Goddess ‘Durga’ in a bid to promote her Reebok partnership. The picture was supposed to pay homage to the goddess and showcased Cardi B as a warrior woman with eight hands while holding a bright red pair of sneakers.

However, netizens did not take this representation of Goddess Durga very well. Many criticized the rapper for her bare-bodied homage to the Goddess and affronted her for comparing herself with the Goddess.

People shamed Cardi B for depicting the deity with a shoe in her hand since Hindu temples consider shoes unholy and using Durga Ma as an aesthetic. Many simply outraged against the rapper choosing to portray herself as Durga in Western attire rather than her traditional clothing. Many such comments, of course, bordered on sexism and shaming. Others felt offended by the fact that the rapper used a Hindu god to sell sneakers, essentially commodifying an item of faith.

This is not the first time that the conservative Hindu community has objected the use of Hindu symbols, motifs, and deities by international brands and marketers. The outrage comes even amid reports of Amazon pulling doormats with the word 'Om' from their website after Hindus outraged against the commodity.

Rapper Badshah to make his acting debut opposite Sonakshi Sinha

Ranveer Singh will play the rapper in Zoya Akhtar’s next?

Asin On The Cover Of The Hindu Bridal Mantra

The Shooting of Trayvon Martin that divided United States