Rahul Vaidya Proposed to Girlfriend Disha Parmar, Will She be Invited to BB14? 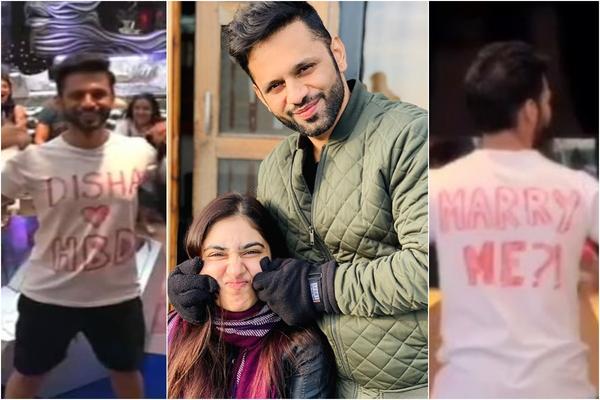 Singer Rahul Vaidya who is presently seen in Bigg Boss 14, has been playing his part well in the game and is getting love and obligation from his fans. He is evolving as a great contestant and one of the strongest players in the show. And now Rahul has just created a buzz around with his latest confession. The latest episode of the show is out, and Rahul is seen confessing his love for girlfriend and actress Disha Parmar on her birthday (November 11). Rahul proposed marriage to Disha after telling everyone about her in the cutest way possible.

In the latest episode it is shown when Rahul tells, “Today is a very a special day for me. There’s a girl in my life and that that girl’s name is Disha Parmar. God! I have never been so nervous. I don’t know why it took me so much time to ask you – Will you marry me?” Rahul, who was wearing a white T-shirt with Disha’s name written on it, turns around with ‘Will you marry me’ written with lipstick.

There have been dating rumors between Rahul and Pyaar Ka Dard Hai actress Disha Parmar for a longtime, but the former, before entering the house had denied and said, “We are just good friends.”

Soon after Rahul proposed to Disha for marriage, her reaction went viral. Taking to the Instagram story, Disha's friend shared a video in which she was seen cutting her birthday cake surrounded by her friends. When she is asked if she's happy, Disha replies 'Obviously!' After which another friend asks her if the reason behind her happiness is the 'proposal' by someone special on national television. As soon as she listens to this, she turns all pink while blushing and starts hiding her face.

Well, we hope that Disha is invited to BB14 as a guest. We can’t wait to see Rahul and Disha together inside BB house.

Celebrities in this Article: Rahul Vaidya

THIS is why Disha Patani don't like to watching her films

Disha Patani will only work with Tiger, Ranveer, Ranbir or Varun Dhawan her upcoming flicks

How To Pop The Proposal On Propose Day?