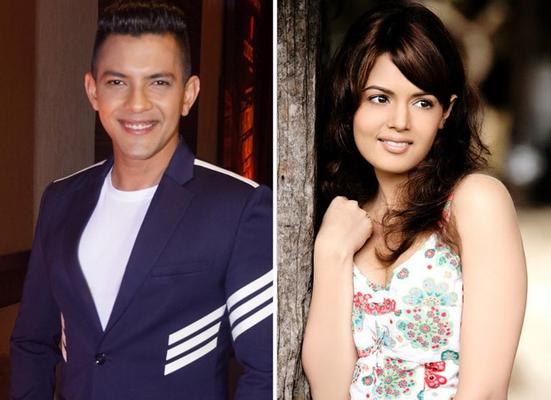 Udit Narayan's son and Indian Idol host Aditya Narayan's wedding festivities have begun. A picture from singer Aditya Narayan and his longtime girlfriend, Shweta Agarwal’s ‘roka’ ceremony was shared online on Wednesday. The couple recently announced wedding plans, after over a decade together.

In a photo that has surfaced on the Internet, Aditya and his long-time girlfriend Shweta's families all seem assembled around the couple as Shweta holds 'shagun' items displayed on a tray in her hand. In what can be professed as a photo from the soon to be married couple's roka ceremony, the two looked happy and excited as they posed for the cameras.

While the couple is seen seated next to each other while, the elders stand behind them to pose for a perfect family photo. Dressed in a pink Indian attire Shweta looks beautiful while Aditya donned a grey short and denim for the intimate, at-home ceremony.

After the photo went viral, Aditya also posted a picture and wrote, “I am the luckiest man alive to have found Shweta, my soulmate, 11 years ago & we are finally tying the knot in December. We are both extremely private people & believe that it’s best to keep one’s private life, well, private. Taking a break from social media for shaadi prep. See you in December.”

Earlier, on November 3, in an Instagram post, Aditya made his relationship with girlfriend Shweta Agarwal official. In the post, Aditya shared a photo of him hugging Shweta and publicized that he will be getting married to her in December.

Celebrities in this Article: Aditya Narayan

Aditya Narayan: Marriage with Shweta Agarwal should happen by November or December

You want to know, who gifted Deepika Padukone this gorgeous royal saree!Find here

Marry Me, Up in the Air!
LATEST EVENTS / GALLERIES
Most Read
...loading