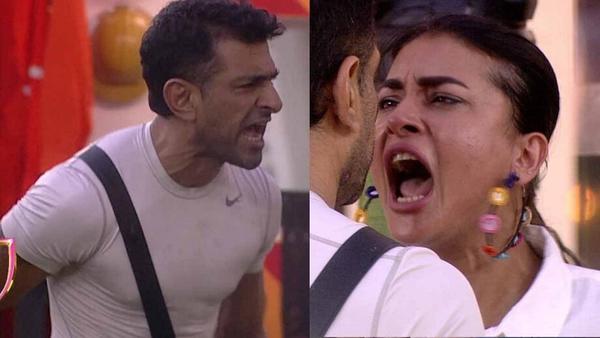 Eijaz Khan and Pavitra Punia's bourgeoning romance on Bigg Boss 14 is gripping attention for more reasons than one. They aren't an official couple, yet. They haven't confessed being in love. But one would be really foolish to not see the signs and sparks flying between the two.

Whether it's the way Pavitra takes care of Eijaz, tries to understand him even when he doesn't say much or how Eijaz silently protects Pavitra during tasks or fights, the two are regularly getting inseparable. Their fights too are never ugly or out of hate but all out of love and concern.

It's been 4 weeks since Bigg Boss premiered and Eijaz-Pavitra's romance has been only thriving by the day. They are getting closer and are intuiting a connection that is definitely not restricted to friendship.

In the latest promo of tonight's episode, Eijaz can be seen red-faced when linked to Pavitra. Eijaz asks Nikki if he should dye his beard to which she replies that he should ask this to Pavitra and do whatever she says. Eijaz smiles his heart out after hearing this. On the other side, Pavitra is seen wondering what she should name her relationship with Eijaz. She is amazed at how quickly feelings have escalated between the two. Jaan Kumar Sanu tells her that it's actually nice how he accepts her the way she is and she too reciprocates the same.

Some viewers feel that Pavitra's feelings are fake and that she's only doing it for TRP, while many also feel that it'll be great if something really works out between Eijaz and Pavitra. Well, we will be happy if something works out for the couple.

Celebrities in this Article: Eijaz Khan

Romance is Already Budding in BB14!

Sushant Singh Rajput: If Ekta Kapoor tells me to do anything, I will follow her

Priyanka Chopra At The Music Launch Of Lucky Kabootar