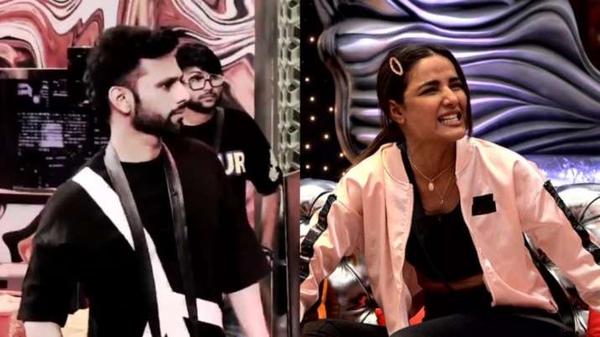 The ongoing captaincy task in Bigg Boss 4 has had Twitter erupting in offence! As Jasmin Bhasin pulls out 'women card' and accuses Rahul Vaidya of using force and threatening her, audience wants to know exactly when that happened.

As the Green Zone and Red Zone played out this week's captaincy task, Rahul Vaidya went to take away a bag that Jasmin held. He started by politely requesting her to leave the bag, he even said that her injury will worsen if he snatches it from her. But she refused to let go. When he finally did snatch it away, Jasmin created a big ruckus in the house. She screamed, she cried, she stomped, she even spitted and threw water at Rahul. What a drama queen and what a sore loser!

Naturally, Twitter is offended at this dramatic reaction for something that did not deserve even a little bit! But while Jasmin is trying to paint Rahul in a blackish tone, poeple are supporting him for maintaining his calm and dignity.

Rahul Vaidya Proposed to Girlfriend Disha Parmar, Will She be Invited to BB14?

OMG - Rashami Desai Has Been Signed for Naagin 4!

It’s not right time to judge on my captaincy, Virat said on the eve of the series-opener against Australia

B-Town Celebs Spotted At A Fashion Exhibit Hosted By DVAR