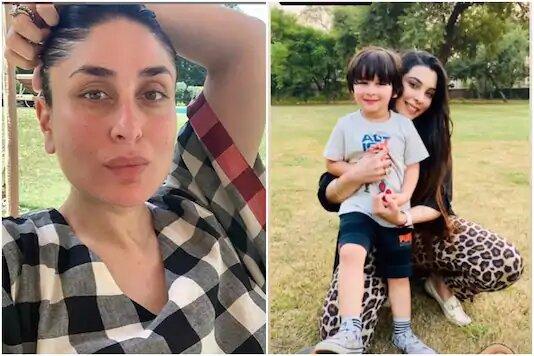 On her Instagram story, Kareena shared a loveable photo of Taimur and his Spanish teacher Eshleen S Jolly and wrote: "We love Spanish." Kareena, who is pregnant with her second child, and Taimur are currently in the Pataudi Palace and looks like Taimur's Spanish tutor dropped by to pay them a visit. She shared a few photos on her Instagram stories, one of which she captioned: "Finally got to meet my Spanish student off screen." Taimur can be seen smiling ear-to-ear in the pictures.

Taimur’s teacher is called Eshleen S Jolly and she teaches Spanish to mostly young children. Eshleen had shared a picture of her with Taimur, which was later shared by Kareena Kapoor Khan. Along with the picture, Eshleen also wrote, “Finally got to meet my Spanish student off-screen.”

Taimur had been taking online classes of Spanish which were being taught by Eshleen, and this was the first time the two met in person. She visited Kareena and Taimur at Pataudi palace, which is where the family is currently stationed.

The photos appear to have been clicked over the weekend as on Saturday.

Celebrities in this Article: Kareena Kapoor

Kareena, Saif and Taimur are picture perfect under the Tuscan Sun

Pics of Taimur, Saif and Kareena from their Maldives holiday

Saif-Kareena takes Taimur along for his first Swiss holiday

So adorable! A picture of the baby and momma Kareena, will melt your heart