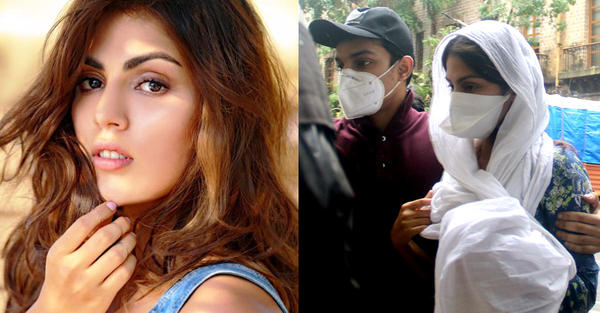 Rhea and Showik Chakraborty are presently being barred by the Narcotics Control Bureau and the latest admission by the siblings now involves several Bollywood celebrities. According to a media house, during the interrogation, Rhea gave names of several actors, directors and producers who are allegedly related to a drugs lobby. The actress has also reportedly mention recent Bollywood parties and how drugs were trafficked. According to the media houses, in the next 10-15 days the NCB is expected to start issuing subpoena to the celebs names, after proper corroboration.

According to sources, Rhea during her interrogation with the Narcotics Control Bureau (NCB), revealed that actresses Sara Ali Khan, Rakul Preet Singh, designer Simone Khambatta, Sushant's friend and former manager Rohini Iyer and filmmaker Mukesh Chhabra consumed narcotics substance. Ever since this has come out, the internet can't keep calm over it. Sara Ali Khan and Rakul Preet Singh's names have been trending big time on social media platforms with several meme-makers and trolls having a field day.

Rhea got questioned for the third time by NCB recently. She also revealed that drugs were consumed on the set of one of Sushant's movies. The NCB will also summon Sushant's co-stars and other actors. Rhea has also listed the Bollywood parties where drugs were consumed. NCB is penetrating the drug angle in Sushant Singh Rajput death case. They had earlier arrested Showik, Sushant's house manager Samuel Miranda, and the actor's cook Dipesh Sawant. They will be produced before the court on September 9.

Celebrities in this Article: Rhea Chakraborty

SSR case: “Rhea Chakraborty was not allowed to attend Sushant’s funeral, name struck off from the list” states her lawyer Satish Manshinde