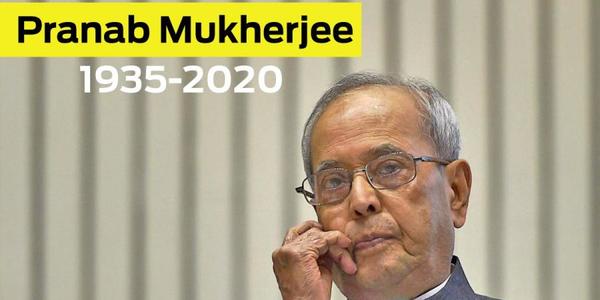 Former president of India Pranab Mukherjee passed away on Monday evening at Delhi's Army's Research and Referral Hospital where he was admitted since August 10. He was 84. His death has been widely condoled by leaders across the political range of the country. Celebrities too expressed sadness over his death.

His son Abhijeet Mukherjee broke the news on Twitter. "With a Heavy Heart, this is to inform you that my father Shri #PranabMukherjee has just passed away inspite of the best efforts of Doctors of RR Hospital & prayers ,duas & prarthanas from people throughout India ! I thank all of You," he wrote.

Often tenderly called the encyclopaedia of present-day Indian history, current affairs and constitutional norms, Mukherjee, who died after a chest infection and related illnesses at Delhi’s Army Referral Hospital on Monday, certainly leaves a void in Indian polity, never to be filled. A man who could be the accessible Pranabda to all and assorted, and still inspire awe and respect—the eminence grilse who could reprimand anyone and everyone, whenever he thought it fits.

In the political sense, much like A B Vajpayee, Mukherjee was a child, a byproduct of parliamentary democracy. He truly believed in the power of debate. He was, indeed, very pained and disturbed in his last years about the decline in parliamentary functioning, and its image, centrality and prestige.

Celebrities in this Article: Pranab Mukherjee

RIP Irrfan Khan, You Will Be Missed

Joy Mukherjee Is No More

Tamannaah Bhatia Gets Felicitated By The President Of India

Pranab Mukherjee Sworn In As the 13th President of India
LATEST EVENTS / GALLERIES
Most Read
...loading