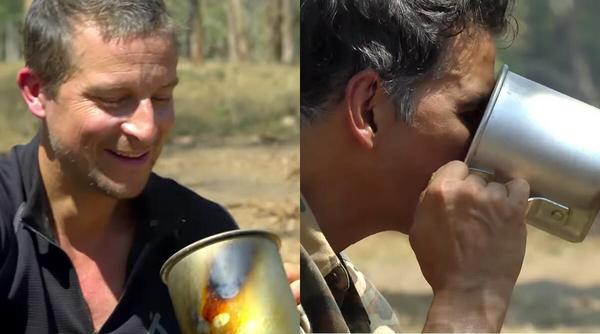 PM Narendra Modi and superstar Rajnikant have already shot special episodes of Into the Wild with Bear Grylls. Both episodes were givena lot of love in India. Bear Grylls has shot another special episode of 'Into the Wild' in India. This time his celerity guest was our desi Khiladi - Akshay Kumar! We all know how fit and active Akshay is in real life as well as his onscreen characters. So it will be great fun watching Akshay deal with the wild as he shoots with Bear Grylls.

Akshay recently shared a video clip from this special episode. In the beginning of this clip, Bear Grylls is seen praising Akshay. Then Akshay returns some compliments to Bear. But the most interesting part is Akshay's caption for this video. It reads, "I knew there would be stiff challenges prior to #IntoTheWildWithBearGrylls but @beargrylls completely surprised me with the elephant poop tea. What a day!"

Elephant poop tea! Who would have imagined Akshay drinking this concotion?

Wow! John bears a probability to do a biopic