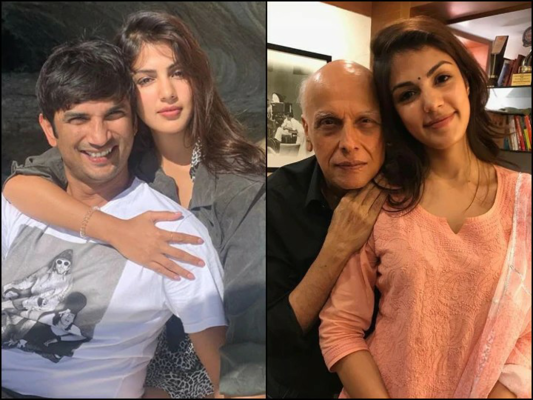 As the enquiry in Sushant Singh Rajput's death case is edging forward slowly, new secrets are clarifying in sync. The latest being the kind of relationship that Rhea Chakraborty and Mahesh Bhatt shared and how he deeply prejudiced Rhea's personal life, and her decisions.

Times Now transcripted the WhatsApp conversation between Rhea Chakraborty and filmmaker, Mahesh Bhatt and made it public. The chat divulges the fact that Mahesh Bhatt was well aware of anything and everything that was going on in Rhea and Sushant's relationship. The WhatsApp conversation also tosses light at the fact that Bhatt had predisposed Rhea into not continuing her relationship with Sushant. In fact, he had counseled Rhea against it, and it also seemed that it was Mahesh Bhatt's influence that had led to Rhea and Sushant's plausible breakup.

According to a snapshot of the chat available with Times Now, Rhea had messaged to Bhatt and had said, "Aisha moves on..sir..with a heavy heart and sense of relief." Aisha was the character Rhea portrayed in 2018 film Jalebi, co-produced by Mahesh Bhatt. In the next message, Rhea had written, "Our last call was a wakeup call." And the next message read, "You are my angel You were then And you are now." In two separate messages, Bhatt had replied, "Don’t look back. Make it possible what is inevitable", and "My love to your father. He will be a happy man."

Further, in separate messages, Rhea had stated, "Thank you destiny that I met you"; "You are right", "Our path met for this day"; and "Not for a film, but something very different, every word you have said to me Echoes in me and feel a deep impact of your unconditional love". The conversation on WhatsApp had gone on, with Rhea writing, "I love you my best man", and "Will make you proud". Bhatt had replied, with emojis of folded hands, "You have. Truly. It takes guts to do what you did. Don't look back."

Rajput's father KK Singh had filed a case against Rhea with Patna Police, accusing her of abetment to suicide. After his FIR, the Bihar Police, and now the Central Bureau of Investigation (CBI) is probing the matter.

Whatsapp: How to Read Messages That Were Deleted for All?

Would You Compare Alia Bhatt With Meryl Streep?

Mahesh Bhatt refuses to be provoked

Mahesh Bhatt: 'Aashiqui' album had all seasons of love

Mahesh Bhatt heartwarming message for Alia Bhatt in her birthday

Baba Ram Rahim Was Popular in Bollywood too!