Shocking Images of the Explosion that Rocked Beirut 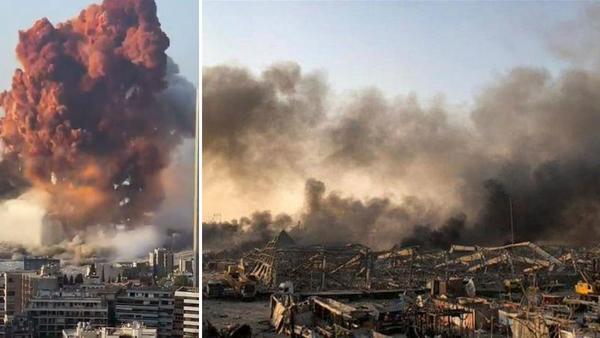 At least 100 people are dead and 4,000 are injured after a gigantic explosion on Tuesday shook the capital city of Beirut — with Lebanon continuing its search on Wednesday.

As per the latest news, more than 70 people were killed and 3,000 injured, with bodies buried in the rubble. Hours later, ambulances were carrying away the wounded as army helicopters helped battle fires raging at the port. A soldier at the port, who asked not to be named, told an international portal: "It's a catastrophe inside. There are corpses on the ground. Ambulances are still lifting the dead."

The sudden desolation dazed a country already fraught with both the coronavirus pandemic and an economic crisis: Beirut hospitals quickly filled beyond capacity, beseeching for blood supplies and generators to keep their lights on.

Interior Minister Mohammed Fahmi told a local TV station that it appeared the blast was caused by the detonation of more than 2,700 tons of ammonium nitrate that had been stored in a warehouse at the dock ever since it was impounded from a cargo ship in 2014. Witnesses reported seeing an orange cloud like that which appears when toxic nitrogen dioxide gas is released after an explosion involving nitrates.

The blast was exquisite even for a city that has seen civil war, suicide bombings and bombardment by Israel. It could be heard and felt as far away as Cyprus, more than 180 miles across the Mediterranean.

Well, we extend our deepest condolences to all those who got affected in the explosion, and stand ready to offer all possible assistance.

Coronavirus Pandemic Will Get Worse, says WHO

5 Benefits of Including Beetroots in Your Diet

Using a Phone While It Was Being Charged Killed a Man!

Again Kangana Ranaut injures herself on the sets of Manikarnika

Kapil Sharma promises to be back with a blast

Taking A Goat For A Ride!

Another Gun-Crazy Shooter on a Killing Spree!