Guess Who's Making a Film on Arnab Goswami? 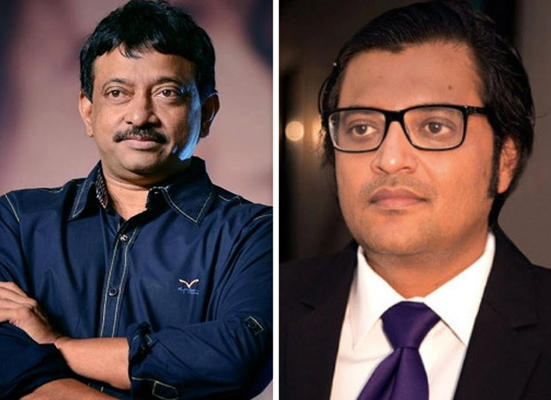 On Monday, filmmaker Ram Gopal Varma launched a Twitter thread on Arnab Goswami and smashed out at him for 'talking about Bollywood in such a horrible way.'

Ram tweeted, "Was shocked to see #ArnabGoswami talking about Bollywood in such a horrible way. He calls it the dirtiest industry ever with criminal connections, it’s full of Rapists, gangsters, sexual exploiters and what not?"

Speaking about the news anchor's comments about the tragic and untimely deaths in Bollywood, he wrote, "It beats me in what dumb way #ArnabGoswami can combine the deaths of Divya Bharthi, Jiah khan, Sridevi and Sushant into one case and claim that the murderer is Bollywood..incidentally the 4 deaths happened over a span of nearly 25 years."

"And in all the four cases of Divya, Jiah, Sridevi and Sushant there were completely different people and circumstances. But in Arnab’s mind they are all one and had been killed by an entity called Bollywood," he added in another tweet.

RGV also publicized that he will be making a film on Arnab Goswami, in which he 'will take the clothes off his facade. The director also came up with a title for his film on Arnab.

Well, by making a film, one gives Arnab more attention. Attention that he doesn't need and certainly don’t deserve. However, since RGV has lost it, I don't think there's any point of trying to make sense of what he's doing and why he's doing it. All we can do is focus on what’s important.

After Stupendous Success of Sanju, RGV to Show you the Real Story!

This star will be in Ram Gopal Varma's next flick

RGV says I regrets most of my cinematic outing with Big B, except for the Sarkar series

RGV: Sarkar 3 is full of grey characters, none of which can be called as a hero or a villain

RGV: Truth behind Jayalalitha and Sasikala relationship is unimaginably shocking

Anupam Kher launches his book - The Best Thing About You is... You - Event Photos

You Will Love Sunil Grover in this Video

Is Arnab A Little Too Much To Take

Nathalia Kaur is the Only Saving Grace in Department!
LATEST EVENTS / GALLERIES
Most Read
...loading