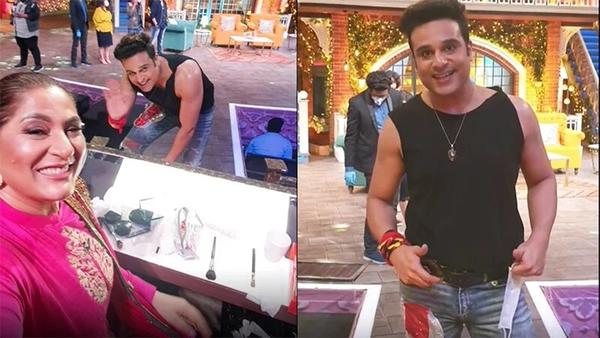 Recently show artist Krushna Abhishek revealed that both he and Kapil Sharma have lost weight. In a recent video, Krushna is seen chatting with Archana Puran Singh as he shows his muscles and leaner look that he has been working on for months. As he displays his biceps, Krushna says that even Kapil has lost weight during the lockdown period and further jokes how Kiku Sharda and Bharti Singh have not.

Interestingly, the video started with Archana Puran Singh's voice, where she can be heard praising Krushna for his act. Meanwhile, he pulled her leg and joked that nothing can beat her laughter as she applauded the work that Krushna and the team of TKSS are doing amid the pandemic. He was also seen imitating Akshay Kumar's song Bala, from Housefull 4.

Instagramming the video post, Archana Puran Singh wrote the details of the fresh episode and wrote that from August 1, the makers will broadcast new content. The show will continue with its previous time slot, that is 9:30. Talking about the video, it harvested more than 224k views and is still counting. Many fans of The Kapil Sharma Show expressed their excitement and happiness as the show will mark its comeback after four months.

Well, it will be fun to watch Krushna and Kapil in a fit avatar. Stay tuned to watch the new episodes of The Kapil Sharma Show.