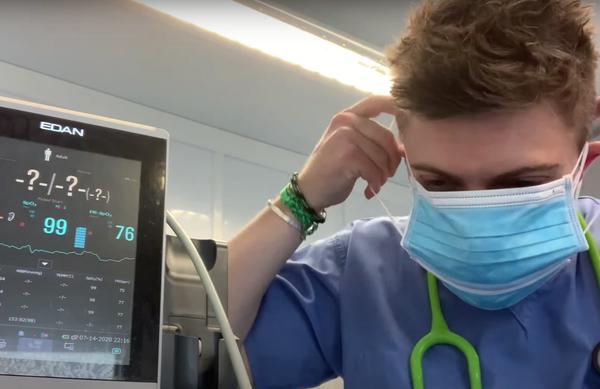 A doctor based in Dublin, Ireland, has deflated the idea that a face mask lowers oxygen levels. In fact, he's shown that even wearing several has no effect.

A doctor put this to the test, recording himself and nursing his blood oxygen level — as he layered on six masks. As mask-wearing suggestions and directives have become commonplace to stop the spread of the coronavirus, a medical myth has spread that wearing a mask stops oxygen from getting into the bloodstream, possibly causing brain damage.

When asked, ‘if wearing a face mask lower your oxygen levels’ repeatedly by patients today, ”Dr. Maitiu O Tuathail of Dublin, Ireland, posted a tweet last week stating, “I managed to get six face masks on + it had no effect on my oxygen levels.” In the video tweet, O Tuathail layers on masks as his oxygen level and pulse are monitored. His oxygen level remains at 99 percent, despite the layers of face coverings.

In his tweet, he further mentioned that even for those with medical conditions such as asthma, wearing a mask is still advised. The stance was backed up by Dr. Albert Rizzo, chief medical officer for the American Lung Association.

Wearing a mask has proved to be one of the most effective ways to prevent the spread of COVID-19. So, start to wear a mask without any false notions.

Are You Using Your Face Mask Properly?

Are Face Masks Really Useful in Preventing Spread of COVID-19?

Home Made Masks to Get Rid of Facial Tan

Benefits of a Besan Haldi Mask for your Face

5 Signs that You Suffer from Anaemia

How to Make a Protein Mask for your Hair

Vidya Balan shows how to wear your mask right

Sonam Kapoor flies off to London amid COVID-19 Pandemic

The Batman is Back