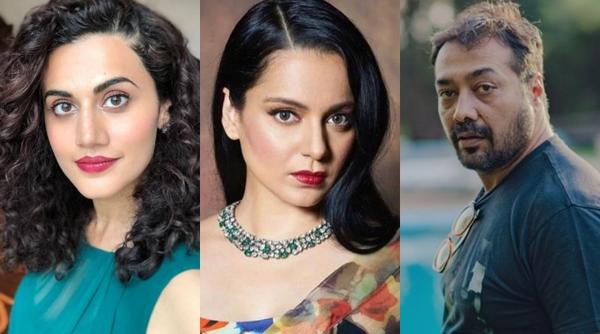 The nepotism debate in Bollywood has been reignited after the death of Bollywood actor Sushant Singh Rajput. Netizens and many celebrities have concluded that his death was in some way connected to nepotism in Bollywood.

We all know that Kangana is the only person who ignited this debate and now there are number of participants favoring and some disapproving the presence of nepotism in Bollywood. Lately, Kangana Ranaut appeared on a channel where she spoke about the predominant culture of nepotism in Bollywood and how that occasioned in Sushant Singh Rajput’s death. After Kangana’s interview with Arnab, there are number of participants joining in the nepotism debate.

Filmmaker Nikkhil Advani tweeted, "In an industry which is misogynistic, gender biased and sometimes quite murky the important thing for Women who have made it (insiders/outsiders) to do is to STICK TOGETHER. Need to stop all this tamasha and fight for the important things. #EqualCredit #EqualPay #justsaying"

Actor Esha Gupta tweeted, "If history has taught us anything, it’s the fact that, whenever a woman rises against authority, she’s called either crazy or bossy or difficult. It’s easier to be a part of herd than stand against all."

Actor Payal Ghosh supported Kangana Ranaut in her recent tweet. She mentioned, "Finally, the nepotism and the heavenly #SushantSinghRajput matter. @KanganaTeam came out and spoke for all of us outsiders. She truly has been voice of the conscious for bollywood."

Whereas there are celebrities like Pooja Bhatt, Anil Kapoor, K Balki, etc, who opposed all the claims of Kanagana and bounced back on her with all their statements to prove her wrong.

Well, it is very prominent that the Bollywood industry is now divided into two separate groups. What is your say on presence of nepotism in Bollywood?

Celebrities in this Article: Kangana Ranuat

Mrunal Thakur on nepotism experience: Was snubbed at award function for not been a star kid

Saqib Saleem: People representing outsiders have careers run by their own sisters

Rahul Bhat: A very big star promised me something, but that never happened

Ranbir Kapoor: I am a "product of nepotism”

Obama Vs Romney: Round 3
LATEST EVENTS / GALLERIES
Most Read
...loading