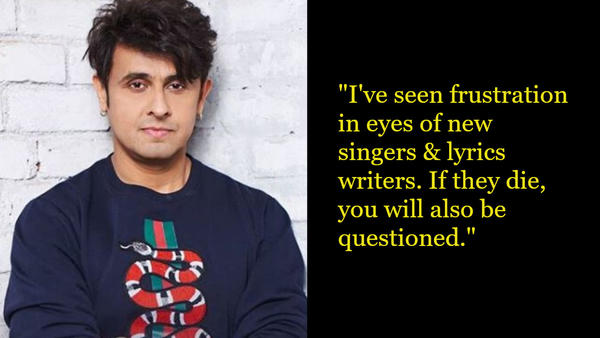 Sushant Singh Rajput’s death by suicide has flashed a debate on social media and many fans of the actor are fuming about his untimely demise. Bollywood has been shaken up and guilt game regarding the film industry’s treatment towards Sushant is being brought under the scanner.

Recently, its Indian musician Sonu Nigam who expressed his thoughts on the same. He said the music mafia is bigger than the film mafia in the country. Sonu Nigam recently shared a vlog on his Instagram where he spoke about his concern in the music industry. He doesn’t want some other artists from the music and film industry to take such a drastic step just like Sushant. Sonu can be heard saying, “Today, Sushant Singh Rajput, an actor has died. Tomorrow you can hear the same about any singer, music composer or lyricist because there’s a bigger mafia that exists in the music scene in India. I understand there’s a business involved and people want to rule. I was lucky to debut at a young age and hence was able to escape this mess. But it’s a difficult scenario for the new kids”.

Sonu Nigam tinted a couple of music companies that use their power and end up creating a lot of trouble for singers, composers, lyricists. He said, “Be kind to the young talents. Don’t push them to the wall. Even my songs have been dubbed a number of times. It’s humiliating to call a singer, make him record songs and then dub his songs”.

Well, it is important that we are kind to each other in these hard times. Sonu Nigam is currently stranded in Dubai.

I light an aggarbatti, salute the spirit of India: Pooja takes a dig at Sonu Nigam