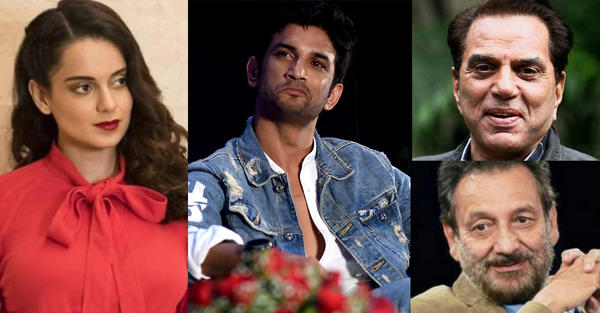 Actor Sushant Singh's sudden departure has triggered the discussion about nepotism in Bollywood. People have reverse-engineered Sushant’s suicide and decided that the ‘nepo gang’ was to be blamed for his death.

Many Twitter users are roasting Alia and Karan for representing nepotism in Bollywood, and hailed Kangana for always being openly critical of it. Alia and Karan had shared condolence messages for Sushant on social media, in which they said they were devastated by the news of his suicide, but the post did not go well with the netizens. Social media users have brought up an instance from when Alia appeared on the Koffee with Karan show and apparently joked about not knowing who Sushant was. In the episode, Alia was asked to rate three male actors in a Rapid Fire question - the choices were Sushant Singh Rajput, Ranveer Singh and Varun Dhawan. Bhatt said, "Sushant Singh Rajput, who?"

Twitter users are supporting Kangana who had once called Karan the 'flagbearer of nepotism' on the same show. Actress Urmila Matondkar, in her condolence tweet on Sunday, said that Sushant had made it big through his sheer hard-work in an industry ruled by nepotism.

Sushant recognized nepotism as a universal phenomenon and was vocal about it in his own way. He believed that “Nepotism can co-exist with all the talented people also and you will get wonderful films because then they will be competing with each other and that would raise the performance.” We need to look at Sushant’s death from a more empathetic and kind perspective, otherwise, it would be a great disservice to the legacy left behind by him.

Kumar Sanu: I hope next generation gets equal work because of Sushant Singh Rajput

Here's what Sushmita Sen said when asked about nepotism in Bollywood

From SRK, Kangana, Ayushmann to Sushant Singh Rajput: 'Outsiders' who made it big in Bollywood