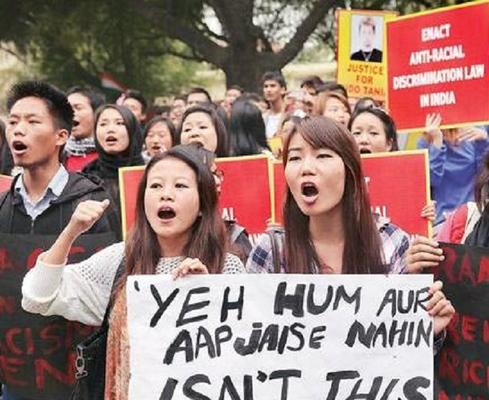 As the world seems to be burning with the anti-racism protests sparked by the death of George Floyd, we see so many desi people marking these protests with their own support. It is a really good gesture to support a movement against racism. But what about the racism at home? We are doing nothing to tackle that. In fact, these same people are pepetrators of racism at home, without even realizing it!

There are 4 distinct examples of racism in our country.

The first one is very easy to guess - on the basis of religion. People of one religion will not eat with the people of another religion. They will not rent their homes to them and will even avoid hiring them for work.

The second example is our age old caste system. You cannot see much sign of it in big cities today. But the system is still thriving in rural India. People are still practising age old customs that divide the society.

The third example is our treatment of migrant labourers from Bihar and UP. These labourers work all over India but find respect nowhere. They are seen as lower class, ridiculed for their accent and not allowed to be a part of the mainstream society.

The fourth example is our treatment of our countrymen from the North East. These men and women travel to Delhi, Bombay and other cities in pursuit of better education and jobs. But they are reduced to be being called chinki and the girls are treated in a lecherous way by locals. We refuse to accept them as our own country men.

While many Indian people are showing support to the current movement against racism, we all know how Africans are treated in India. We call them kaalu, and ridicule them, knowing they do not understand our language. Let us first try to fix these racist attitudes in our own country first!

An Introduction to the Concept of Ageism

Shilpa Shetty is a Victim of Racism.

What does religion mean to you?

Zaira Wasim: The praise that comes my way is dangerous for My Iman

Shah Rukh Khan: ‘I am a Muslim, my wife is a Hindu and my kids are Hindustan’

Makers of Mom plans a new promotional strategy for the movie