Should You Eat Sprouted Potatoes? 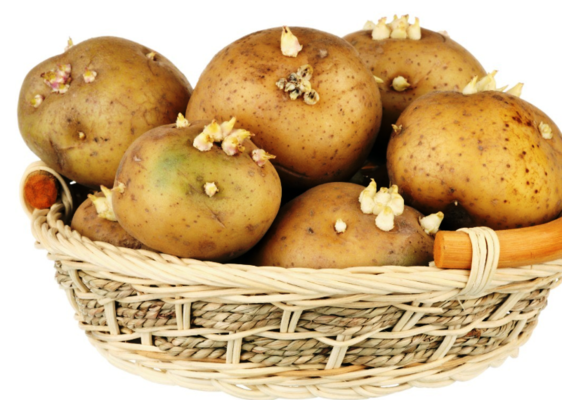 We have all bought that big bag of potatoes which came with a discount, but then many of them sprouted before we could finish ll the potatoes! What do you do with such sprouted potatoes? Some poeple believe it is perfectly ok to use sprouted potatoes. On the other hand some people strictly believe sprouted potatoes to be toxic and will always throw them out. What is the reality?

Potatoes contain Chaconine and Solanine, 2 glycoalkaloid compounds. These compounds can be toxic if consumed in high amounts. It is found that when potatoes have sprouted, the amount of these glycoalkaloids is much higher. This is why people believe sprouted potatoes to be toxic. Consuming these potatoes may lead to diarrhoea, vomitting and abdominal discomfort. If consumed in excess, these glycoalkaloids can even lead to low blood pressure, fever, headaches and confusion.

It is also found that these compounds are found in the potato skin, eyes and sprouts.

It is advisable to buy potatoes in small quantities so that you can avoid sprouting completely.

How to Make the Perfect Hash Browns at Home?

Food items that can Warm You Up in this winter

3 Winter Vegetables that Keep You Healthy

What Makes Potatoes The Most Loved Comfort Food Around the World?

Toxic Teaser: After Genda Phool, Badshah and Payal Dev are all set to surprise you with this melody, featuring Ravi Dubey and Sargun Mehta

90 per cent of how you look depends on what you eat: Disha shares her fitness mantra

Sara Ali Khan: Acting lets you forget who you are

Kriti Sanon: Panipat transports you to a different era

Rajummar Rao to Patralekhaa: You make me proud. You wonder girl

Sanjay Dutt gets emotional and says all that I am is because of you. I miss you!"

Can you imagine! Nawazuddin in the farmlands not on a movie set

Shahrukh And Family Celebrate Eid At Mannat With The Media

B3 Love You Movie Stills

How to Make Crispy Hash Browns Every Time

These Potatoes Taste Yummier Than They Look

Make Your Own Potato Patties

If You Love Potatoes...
LATEST EVENTS / GALLERIES
Most Read
...loading