Do You Like Dhoni's New Look That Everyone is Talking About? 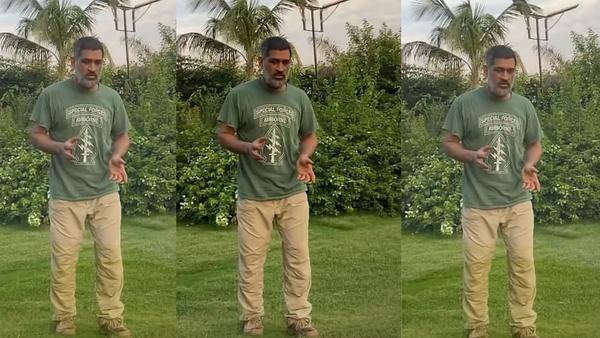 MS Dhoni, who has seldom been sighted in recent times, was seen sporting a bearded look that sent social media into a flap.

Former India captain MS Dhoni has rarely made an appearance on social media during this lockdown. The little glimpses that fans have got of Dhoni have been largely thanks to his wife Sakshi. Other than that, the much-loved Indian cricketer has been a rare espying. However, fans and other social media users were in for a surprise when Dhoni was sighted, sporting a salt-and-pepper beard in Ziva Dhoni's Instagram video.

In the video, Dhoni is seen outlaying some quality time with his daughter and while Ziva is the main protagonist, India's World Cup-winning skipper's brief appearance soon became the talk of the town on social media. Fans went gaga after getting a glimpse of Dhoni's bearded look.

Dhoni's international future has been a major talking point since India's semi-final loss to New Zealand in the Cricket World Cup last year. He was set to return to competitive cricket this summer with Chennai Super Kings (CSK) in the Indian Premier League (IPL), but the continuing coronavirus pandemic meant that the tournament was declared suspended, thereby prolonging his comeback.

We are really happy to see Dhoni on social media. He is rocking the salt pepper look, undoubtedly.

Celebrities in this Article: MS Dhoni

5 Tips to Share with Your Teenager Before They Go on Social Media.

Throwback: Disha Patani looks unrecognizable in THIS picture; see inside

When Maanayata Dutt Met MS Dhoni, It Was Friendship Galore!

All you need to know about MS Dhoni biopic's sequel