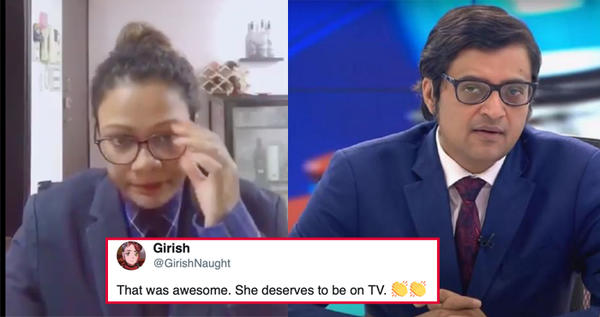 A video of a woman went viral on social media in which she can be seen emulating Arnab Goswami of Republic TV. ‘Lady Arnab‘ is being venerated by fans for her excellent imitation of TV anchor. Since then, video has gone viral drawing hilarious reactions and a person commented that the women must be awarded a ‘Dadasaheb Phalke Award’.

The editor-in-chief of Republic TV has garnered a unique reputation when it comes to hosting of prime-time news debates. Coined as one of the most controversial journalists of Indian media in recent times, his provocative style has been mimicked by many over time. It has also been featured in quite a few memes so far. A Twitter user who shared the video said, “OMG! Who did this? The nation wants to know.” Till now, however, the uniqueness of ‘lady Arnab’ remains unknown. She imitates Arnab’s style of delivery, including his well-known jargon and his style of hardly allowing other debaters to speak by shouting over them.

The woman, clad in a blazer highlighted Arnab’s style of journalism, which is considered to be highly opinionated with assertive and with aggressive tones. Well, if you have not watched the video of ‘Lady Arnab’, you should give it a glance.

Will You Be Eating Maggi Tonight?

Anupam Kher launches his book - The Best Thing About You is... You - Event Photos

Lady Gaga At The Indian GP