RGV Does It Again! 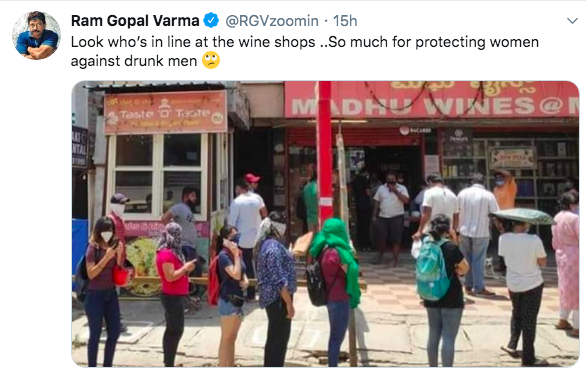 Why do celebrities take to Twitter and post tweets that are going to earn them the ire of people reading their tweets?

Day after liquor shops were allowed to open in parts of India, we saw images of people lining up outside the shops, from all over India. Many people criticized the decision of opening liquor shops for business. The logic is that drunk men at home are a threat to women and children. It is commonly known that liquor is often a part of the problem in households with domestic violence issues. Due to lockdown, the threat of domestic violence becomes even stronger because there are not many avenues for help.

Questioning this line of thought, Ram Gopal Verma tweeted a picture of women lining up outside liquor shops and said, "Look who’s in line at the wine shops ..So much for protecting women against drunk men."

Singer Sona Mohapatra, who is known for being outspoken, replied with this tweet, "Dear Mr RGV,time for u to get into the line of people who desperately need a real education.1 that lets u understand why this tweet of yours reeks of sexism & misplaced morality. Women have a right to buy & consume alcohol just like men. No one has a right to be drunk & violent."

What do you think about this? Is it cool for women to buy and consume liquor or is it bad? Should the society be so judgmental to women who drink?

What Social Distancing? People Queue Up Outside Liquor Shops!

Do We Really Need Prohibition as Advocated by Nitish Kumar?

Kapil's Comedy Not So Comic Anymore!

Freida Pinto Spotted Shopping At A Designer Store In LA

Celebs at a Fashion Shop