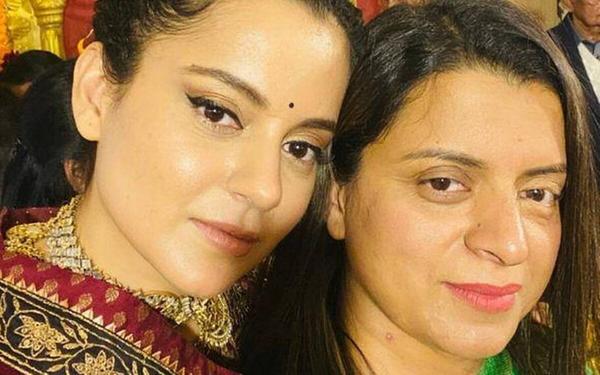 Actress Kangana Ranaut’s sister Rangoli Chandel had her Twitter account suspended on April 16 after her series of coarse tweets that appeared to provoke religious hatred, violence and encourage Islamophobia. Chandel has over the past few years ensured clutching headlines. But it seems Chandel, who is also Ranaut's manager, has finally crossed a line.

In the wake of the Tablighi Jamaat flock held in Delhi being tagged a "hotspot" for the spread of the virus, Chandel recently took to Twitter and posted a tweet so prejudiced and full of hate speech against Muslims that it shocked the nation. On Wednesday, Chandel posted a tweet saying, "A Jamaati dies of corona...when police went to check their families they were attacked and killed, secular media," she wrote. Chandel further added, "...make these mullas + secular media stand in a line and shoot them dead... f***k history, they may call us Nazis (but) who cares. Life is more important than fake image".

The tweets were signposted by Bollywood jewelry designer Farah Khan Ali and filmmaker Reema Kagti, whose acclaims include 'Talaash'. The latter was the first known Bollywood public figure to call out Chandel's tweets.

Not one to back down, Chandel viciously attacked each of her detractors including Farah whom she attacked at a personal level. The bitterness was such that even Twitter, which is known to be lax with action against problematic discourse, had to take cognizance and suspend Chandel's account.

Twitter's policies clearly lay down rules regarding hate speech and incitement of violence. Also, this is not the time to spread hatred but to be united and fight the virus together.

Celebrities in this Article: Rangoli Chandel

Why Are Pakistanis Trolling Asha Bhosle??

Rangoli Chandel’s open challenge to Bollywood: “Kangana Ranaut will stop acting if any solo female actress carries off a 60-100 crores plus film”

Rangoli Chandel insults Alia bhatt in a series of tweets

Twitter battle aside, Kangana Ranaut and Taapsee Pannu gearing up to work with the same director?

After the IOA, Indian Boxing Federation Gets the Boot!