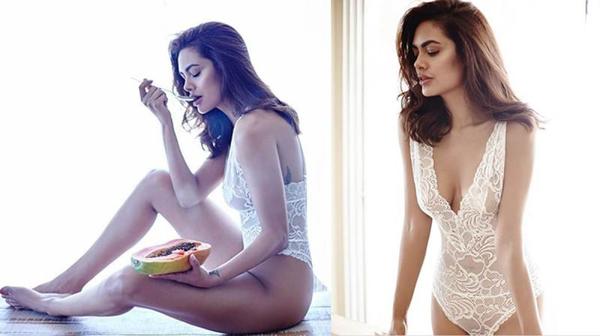 Esha Gupta is one of the most brilliant and versatile actresses in Bollywood. Recently the actress pulled off a complex and interesting yoga pose which left fans stunned.

The actress posed in a compound and visually difficult yoga pose. Her fans were shocked to see her pull off these asanas so smoothly and praised her in the comments. Ali Fazal, who is known for his acting abilities, too took the time out and commented on Esha Gupta’s picture mentioning how tough the pose looked to him. The actor wrote in the comment that his muscles started aching just by looking at her pose in that manner.

As Esha is practicing yoga during this lockdown, she has definitely kept her fans hooked with her super sexy pictures, on the occasion of World Health Day. We are amazed to see Esha being so fit during this time of the hour.

Celebrities in this Article: Esha Gupta

Who Needs a Gym When You Can Get Fit With SuryaNamaskar at Home?

Introduction to The System “Yoga in Daily Life”

Why Kareena Looks So Sexy?

Check here, What Esha Gupta says about not being a part of ‘Hera Pheri 3’?

Esha Gupta has freezed the internet with her scorching hot photos

Esha Gupta dismissed her engagement rumours with a tweet

Esha Gupta On The Cover Of Verve For July 2013

Lose The Belly Fat with Yoga